The Men in the Voynich Manuscript

For months I have been hesitant to point this out because at least a few researchers may very well excitedly declare that the portrait of the manuscript's author has been found. This would be based solely on the fact that this figure is male. 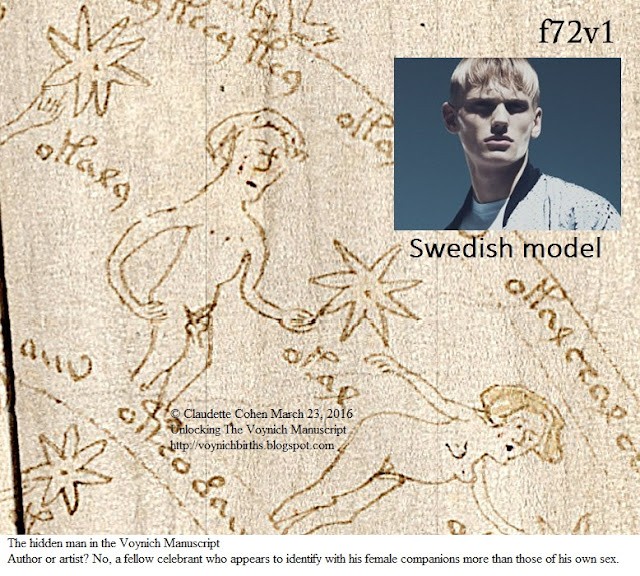 I don't think he's the author at all or even the artist but rather a fellow celebrant who has been welcomed into these rites precisely because he does not identify with his sex but rather with the surrounding women.

If you look at the way he is drawn, you might notice the hand doing the drawing isn't half as sure of itself with proportion and anatomical placement as it is with the females. A comparison of the arms with his neighbor will clue you in to the fact that the artist was not at all comfortable drawing the male figure. His privates are a bit of a hurried scribble even to the point where they look detached, and the testicles appear to be missing altogether. Plus, his nipples are placed just under his clavicle. But the artist duly gives him the heavier jaw and more structured cheeks of a male, a slash of a mouth, and a line along the nose perhaps to make the visage look more angular. In addition, certainly he lacks female breasts so conspicuous on all his companions, and the female rounded shape. He's quite boxy, but notice no muscles and no facial hair. Facial hair is absent throughout the entire manuscript: not one beard or mustache except that the crossbow holder has some chin whiskers.* Muscles, also, are absent. This artist and the culture within which the artist resides appears to place little to no value on symbols of masculinity. 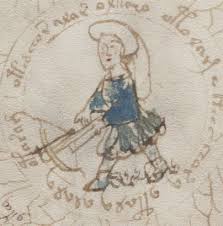 You could say the crossbow shows some indication of masculinity, but even it looks more a cute toy than a weapon used to introduce death in warfare.

*I have been informed by an artist that this crossbow holder could possibly be a female, as it seems to have a bust and fine facial features, such as the pointed chin and reduced jaw. The neck also has a slender profile. So even this, arguably the most obvious depiction of masculinity, could indeed be a female figure dressed as a male.

Just when you think you've nailed something down about the Voynich it will turn the tables on you. I found another man, bearded, among the women dancing in the cylinders.

Posted by Claudette Cohen at 2:12 PM