The Beauties of Bad Press

In the post called Baba Yaga and Dappled Others, I talked about the lore throughout northern Europe of these frightful, knowledgeable hags notorious for using trickery and scare tactics. Russian damsels encounter them holed up in strange abodes deep in the forest and have to get over their fear of these women and accept help from them in order to proceed on their quest for love and happiness. Finland's national hero Väinämöinen reckons with such a force when he wants to marry a daughter of one of them. Check them out. Wouldn't you like to bide a wee and have a cuppa, dearie?

In the Kalevala, Pohjola is the dark and mysterious northland that is ruled by an "evil" witch. Adam von Bremen says that “In the ocean there are also many other islands, all full of cruel savages, and, therefore, the seafarer avoid them. Likewise, told amazons in the Baltic sea at these beaches, which is why they call it the land of women.” 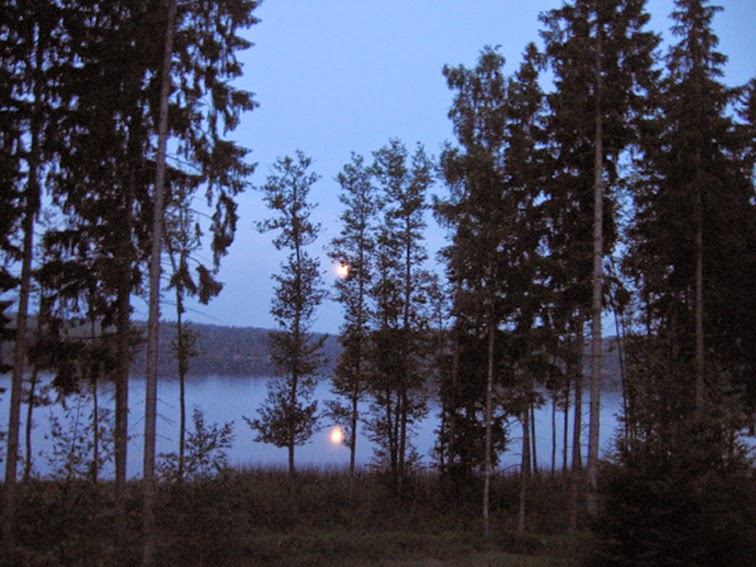 In standard history's eyes, a forbidding and forever cold land run by women, where men can get fooled and poisoned, would be seen more as a tragic wasteland to shun than anything to illuminate, laud, or spend much time writing about. It is anti-history. What we can learn of it we must glean from remnant warnings and anathema. The rest could have quite literally gone up in smoke. 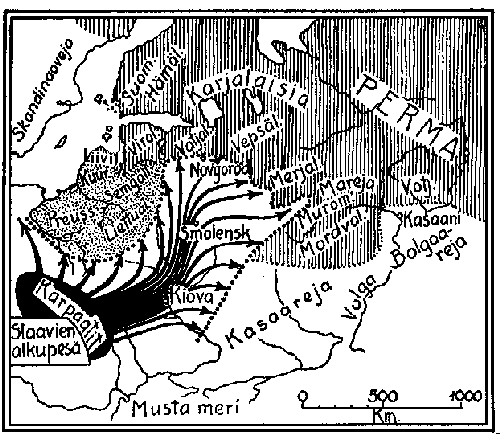 Let's return for a moment to Kvenland as it might have been during the centuries leading up to the time of the Voynich manuscript--the 15th century. The map below shows migrations of tribes through Karelia. The Finnish–Novgorodian wars were a series of conflicts between Finnic tribes in eastern Fennoscandia and the Republic of Novgorod from the 11th or 12th century to early 13th century. The wars' effect on the Finns' society contributed to the eventual Swedish conquest of Finland in 1249.

And just to the south, in the Baltic states, similar dynamics were playing out.

Let's say you are a woman of advanced age leading your people. Given how other tribes will see you, you can be either dismissed or feared. Let's say the stakes are these: if you are dismissed then people will invade your land, take your resources, attack your sons, and carry off your daughters. Welcome to history. 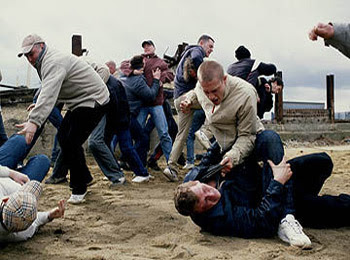 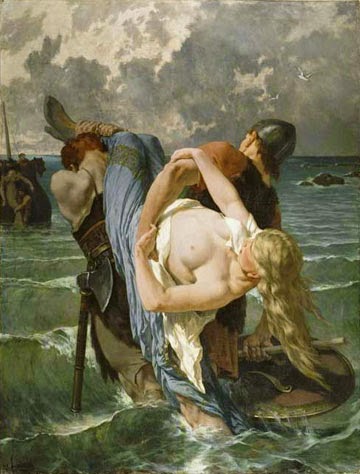 A recent study completed at the University of Eastern Finland suggests that persons captured during raids into areas which today constitute parts of Finland, the Russian Karelia and the Baltic Countries ended up being sold on these remote trade routes. There was a particular demand for blonde girls and boys who were seen as exotic luxury items, and it was financially beneficial to transport them to the far-away markets. The study by Professor Jukka Korpela was published as a General Article in Russian History (1/2014), which is a leading journal addressing the history of Russia.
In this land awash with various tribes at war with one another and ever under the threat of conquest, people learned to live by their wits, as so many legends both Sami and otherwise exemplify. Trickery was part of survival, whether it was to lead the enemy off a cliff, which is a common device in Sami lore, or whether it was to poison the water, as the women in Kvenland were reported to have done.

Below is a particularly manly Louhi speaking with a pair of not-so-happy-with-her Finnish heroes.

During the time when people actually had to figure out what to do about such women, or the women who practiced venerating and emulating such iconic feminine forces, here is Reginald Scot in 1584 detailing some of their purported supernatural powers:

“[Witches] can raise and suppresse lightning and thunder, raine and haile, clouds and winds, tempests and earthquakes. Others doo write, that they can pull downe the moone and the starres. Some write that with wishing they can send needles into the livers of their enimies. Some that they can transferre corne in the blade from one place to another. Some, that they can cure diseases supernaturallie, flie in the aire, and danse with divels. Some write, that they can plaie the part of Succubus, and contract themselves to Incubus; and so yoong prophets are upon them begotten, &c. Some say they can transubstantiate themselves and others, and take the forms and shapes of asses, woolves, ferrets, cowes, apes, horsses, dogs, &c. Some say they can keepe divels and spirits in the likenesse of todes and cats.”  The Discoverie of Witchcraft

It's funny stuff to us, now, but back then, people did actually believe all this sorcery was real. They put old shoes in the attic to ward off evil. They said their prayers as if the Devil were camping on their doorstep. To this day, the images born of this dark age live on in our imaginations. 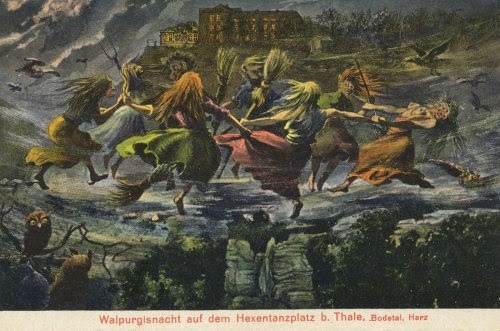 Whatever damage the Enlightenment of the late 17th and 18th centuries gave to Western thought, yet it did demand a rational mind that questioned reactions born of ignorance and fear. By the early 1800s, at least in Europe, executions for witchcraft had come to an end, but this was only after the deaths of tens of thousands of people.

That said, look what this Swedish king did as early as the 14th century (Translation by Pauli Kruhse):

The Letter of Protection by King Birger Magnusson for womankind in Karelia on Oct. 1, 1316.

The original parchment letter was until the end of 19th century kept in the Viipuri (Viborg) city archives. Now it has been moved to the National Archives in Helsinki. The backside of the document contains a writing: Privilege to womankind, wives widows maidens, in Viborg and the whole of Karelia given by King Birger Anno 1316 and similarly confirmed by King Albrecht Anno 1360. 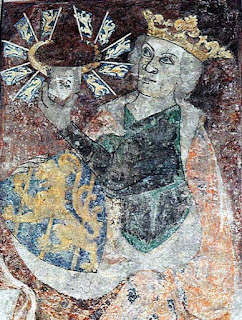 All who will see this letter, we Birger, by the grace of God King of the Swedes and the goths, Salute wishing eternal Salvation in Lord. Through this note we will for both those to come as well for those living now, following the advice and consent of the Noble men Gentlemen Canute Jonsson, the judge (lagman) of the ostrogoths, Thor Kætilsson, and Johannes Brunckow, our high chancellor (drots) and other members of our council, firmly pass a statute, to be obeyed as a law, that all wives and women who live subjected to our castle of Vyborg or in the land of Karelia be they married, widows, nuns or virgins, shall enjoy peace and security like in our realm Sweden herself for both in property and person, so that our royal punishment will most severely meet the transgressors. Therefore all and everyone are strictly prohibited from burdening the foregoing wives and women with any kind of injustice or molesting, or inflicting on them any kind of corporal violence, if he wants in our kingdom to avoid the punishment, which is what is in our Swedish realm told in the due law. Date Yninge Anno Domini 1316, on the first of October.

At least by the year 1316, Karelia became quite officially a land of women.

Now let's return to a scene from the Voynich manuscript.

Aside from the fact that they're female, they don't at all look like Baba Yaga or Louhi, capable of working all this nasty preternatural mischief. Many scholars indeed ignore the Voynich women's obvious middle and advanced ages and pronounce them all that idyllic, vapid, cavorting, innocuous, sexually provocative creature, the nymph. Yet look how the older two appear to be brilliantly living up to the saying, "Nothing gets in the way of a postmenopausal woman." What if these are then, in fact, our Baba Yaga and Louhi? This could be how they saw themselves, not at all vicious hags but powerful women coming together and doing something cool with nature. Under attack from invading tribes, these women may not have had much choice in using trickery and making themselves out to be fiercely destructive forces. They could have been defending their land, their people, their freedom, their way of life, and their sons and daughters. Bad press would seem then a mixed blessing. On the one hand, people would hesitate to mess with you or your loved ones. After all, Adam von Bremen warns: AVOID THESE ISLES. On the other hand, eventually those same people could get organized enough to burn you.

The profound dark cast on the significance of the Voynich manuscript and by extension the society which engendered it does not need a conspiracy in order to have transpired. It needed merely an all too common blind spot regarding women. Put that into the equation and all interpretation can become amazingly skewed, the obvious obscured and the obscure subsumed under more familiar endeavor.

The rise and fall of great men, as of nations, are often involved in an obscurity, which the unaided powers of the brightest intellect cannot remove. As a dense, black cloud, covering the sun, shrouds all nature in gloom, till a gleam, darting from behind, not only gilds the edge, but illuminates and cheers the whole scene; so Revelation throws a clear light on the dark page of man’s story, by which the Divine Hand is seen reducing confusion to order, and introducing men and measures to promote ‘peace on earth, and goodwill toward men.’

This quote is taken from a preface written in 1858 by the Reverend Joseph Bosworth of Christ Church, Oxford. The passage introduces King Alfred's Anglo-Saxon Version of the Compendium History of the World by Orosius. Every word screams teleology, hubris, and agenda. It is the same skewed perspective that made Pythagoras declare:

Here is a 19th c. depiction of the Norse sea goddess, Ran, surrounded by her water nymphs or wave girls. 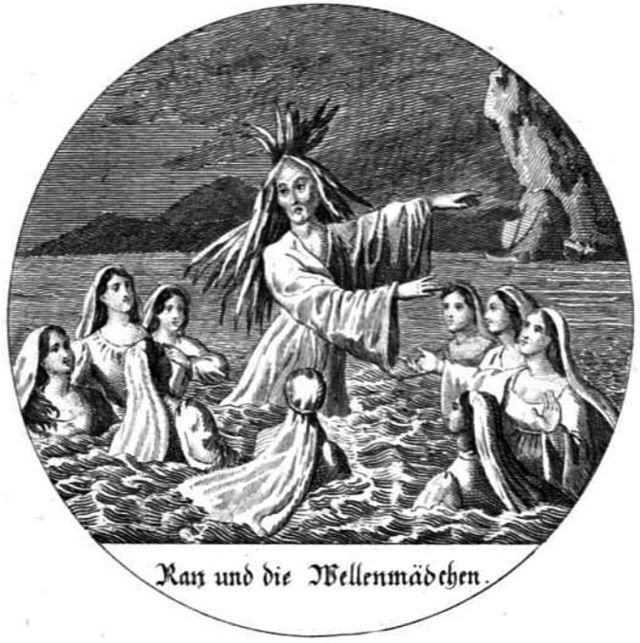 The crone looks to be performing a similar ritual as those in the Voynich, and the girls are doing the same thing--watching and learning. Distilled into supernatural beings, these figures reside only in mythology. As figments of pure fancy far removed from the days when such women entered, here and there, the annals of history, they are romanticized. Distance allows them to be thus circumscribed back into certain discourses--as icons in art and literature. Thus emptied of their own meaning, they become merely vehicles for carrying others' meaning. 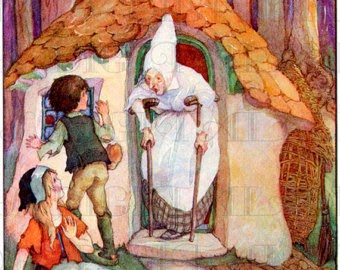 This phenomenon, called cultural cannibalism, leaves little left to piece together. Because of cultural cannibalism, the pieces that do survive rarely make sense within the context of history as we know it, which is Bosworth's and von Bremen's history. When a find is unearthed, it can cause an upset in how we think of our story, challenging our presumptions to an uncomfortable degree. Controversy inevitably follows on the heels of that cognitive dissonance.

Such is the world of the Voynich manuscript, a mystery with a thousand conflicting theories. It is one of the greatest anomalies the world has ever stumbled upon.
Posted by Claudette Cohen at 7:42 PM