Ukko, Red, and the Rainbow

Above is one of the most striking images in the Voynich manuscript, along with some translations of the words, most of them, as with so many words in the manuscript, tied to the Finnic root signifying "life." What is the significance of the double rainbow? Why are the women gathered around it? And why do the words seem to point to some sort of crux about life?

First of all, let's take a look at some Estonian mythology, keeping in mind that the Baltic Finns, in both language and belief systems, were also directly influenced by their Indo-European neighbors, the Germans, the Slavs, and the Balts.

The following is excerpted from Virve Sarapik's RAINBOW, COLOURS AND SCIENCE MYTHOLOGY in Volume 6 of Estonian Folklore.


Interesting connections are coming out likewise with the riddle Üle ilma pihelgas ('The rowan-tree over the world'), the typical Finnish version from it being Pitkä vitsa pihlajainen yli meren ulottuu. Finnish folklorist Uno Harva has referred to an Estonian Swedish variant (the Estonian Swedes lived in the western part and on several islands of Estonia from 13th century to 1944, their selfname was aibofolket): Iwe wärde raunträ in connection with the Finnish deity Rauni. According to Agricola Rauni was the wife of the thundergod Ukko, known also by Swedish Lapps under the name of Ravdna and the rowan-tree (raudna in Swedish Lappish) was dedicated to her. Harva supposed, that the rowan-tree could be a code-name, euphemism for the rainbow and rauni meant originally both rowan and rainbow. Later from it there developed the personification of the rainbow as the wife of the thunder god (Harva 1948). Without considering the essential role the rowan-tree has had in folk-beliefs one may refer to its protective properties against the thunder (e.g. Hwb. d. Abergl. sub rot). Analogical properties were attributed to other things with red details. So, one can suppose the holiness of the rowan-tree was to some extent derived from its red berries. One can also refer to the Old Norse word rauda 'red' (Islandic raudr, Lithuanian raûdas, Sanskrit rudhir). The Estonian word raud 'iron' is derived from it, as rust is also red. Likewise, the name of the deity Rauni could be derived from the Old Norse rauda. One can again recall the connection of red and rainbow in the Balto-Finnic folk songs and suppose, that the rainbow and rowan-tree were linked by the red colour. 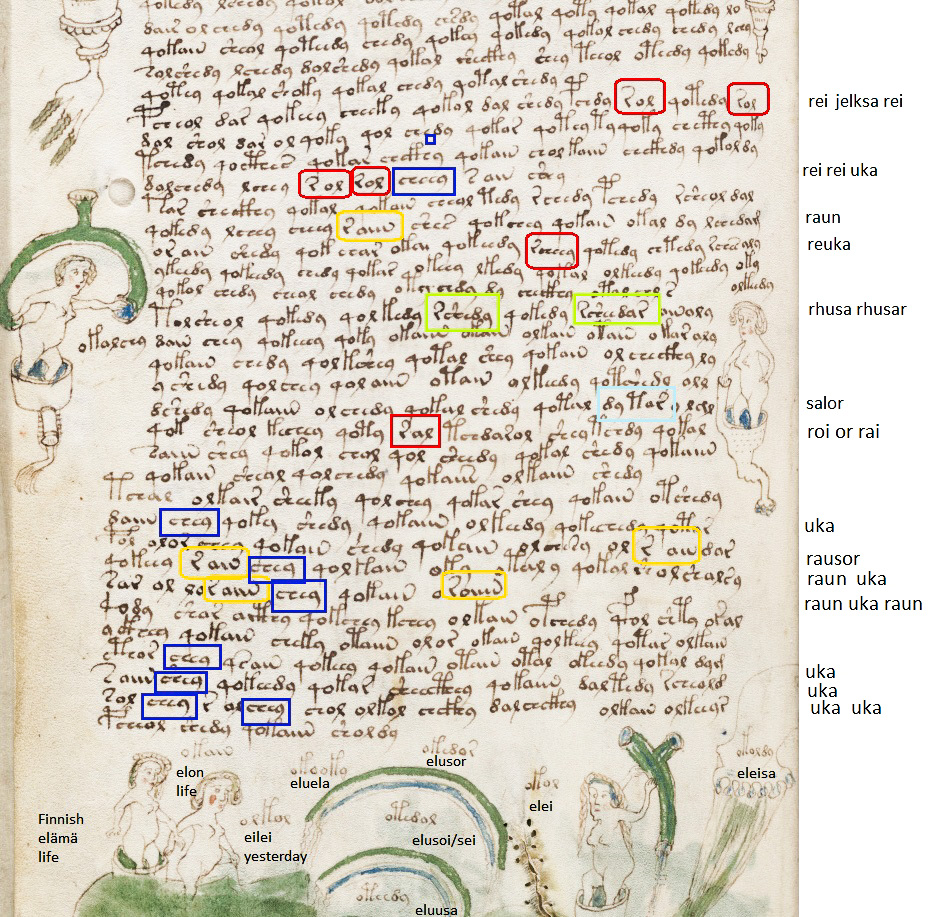 The most significant god in Finnish and Estonian mythologies, Ukko or Äijä or Äijö (Finnish: male grandparent, old man), in Estonian mythology Uku, is a god of sky, weather, crops (harvest) and other natural things. In the folk poems and prayers he is also given the epithet Ylijumala (English: Overgod), probably in reference to his status as the most highly regarded god and on the other hand his traditional domain in the heavens.

In the Völuspá, the first and best known poem of the Poetic Edda, Thor is called called Öku-Thor or Öku-Þórr, According to Cleasby-Vigfússon, a popular etymology, "Öku is not to be derived from áka (to drive), but is rather of Finnish origin, Ukko being the Thunder-god of the Chudic tribes." Jónsson, however, allows Snorri Sturluson's etymology to stand.

Jumala originally meant simply the heavens, then the god of the heavens, and finally God. Other names for Ukko include Pitkänen (pitkä, "long"), Isäinen (isä, "father"), Isoinen (iso, archaic form of the above, modern meaning "great"). Although portrayed active in myth, Ukko makes all his appearances in legend solely by natural phenomena when appealed to. This thunder-sky god with his hammer, club, and sword, resembles the Norse Thor and would later develop under Christianity into an image of the Christian God.

Originally the word " Jumo " in Finnish languages meant the sky, and in this sense it is still used in some cases, for example in expressions " YuMO volgaltla " sky brightens; " YuMO yuklana " sky thunders; " YuMO Burning ", the sky in the clouds; in compound words - yumonÿdyr , "Horizon" (literally "the sky edge.") yumonlulege , "universe" (literally "the skeleton of the sky."). Later, it came to mean the supreme deity: yumonkÿy , "the altar" (literally "stone Jumo.") Yumonpundash , "sky" (literally "bottom Jumo" cf. mugs Pundas

Rites associated with spring planting were practised even before the Christian era. According to our knowledge from the sixteenth century, women were active participants in the fertility rites. The most important of these took place immediately following spring planting, when it was hoped that Ukko, god of the firmament and of thunder, would let it rain. This rain ritual had a sexual idiom.

According to an old poem, Ukko had a sexually eager partner, Rauni. Only when these two were united in the act of love would rain come to the land:

“And once the spring planting was done toasts were made in Ukko’s honour. The throng flocked around Ukko’s tun, and both maiden and woman grew inebriated and merry. Then much that was shameful passed, which was both heard and seen. And as soon as Rauni, Ukko’s woman, waxed lustful, Ukko began to spew and spurt in the high North. That gave us the blessed rain and another harvest.”

The phrase “much that was shameful” refers to sexual acts. Scholars are unsure whether we should take it to mean ritual intercourse, a ‘holy wedding’ (hieros gamos), or simply feasting and merry-making in beer-induced ecstasy.

In medieval times the old spring rites were modified and adapted to the ideology of the Catholic Church. The Whitsun feast in Ritvala remained a fertility rite, but all positive association with sexuality in word and action was expunged from the ritual.

According to some sources, the women singers were now required to be ‘pure’ maidens – women who had not yet had sexual intercourse.

This word may suggest the typical Indo-European root for king, akin to the Irish word ri, meaning king, or it could be a descendant of hreinn. From Proto-Germanic *hrinda-, akin to German Renn ‎(“reindeer”) and Old English hran ‎(“reindeer”), most likely from Proto-Indo-European *ḱer- to increase or grow.

Most of the rest of the words are found throughout the manuscript. As discussed elsewhere, much of this text is made up of songs--charm runes or leelo, joiks or festival procession songs--which are an ancient tradition in the north European countryside, in places like Karelia, Setumaa, Muhu Island, Wilamowice, Poland, Udmurtia, and elsewhere. So, roughly in English, the words read something like this, "Hallelujah glory be, sing praises, make a joyful noise and feast..."

I've been claiming that the Voynich manuscript is no hoax at all and that the reason it's remained such a mystery is because the discourse into which it has fallen has few other surviving cultural reference points by which to make a match. Witness Oleg Lions' Theory 3 that argues for why the manuscript must be a hoax:

Heretical religious discourse (there is no need to conceal the text of an orthodox discourse).
The discourse that could have landed its author at the stake. Burnt alive by the Holy Inquisition. Theoretically possible, of course, but very highly unlikely (for all practical purposes, impossible). Such a sophisticated document, written in a highly intricate artificial language indicated the existence of a highly evolved heretical religious sect that would have definitely left at least some other traces. Of which are precisely none whatsoever.

Actually, Oleg, not exactly "none whatsoever." But did you catch the dismissal and its underlying teleology? No matter that the belief system predates that canon by thousands of years, it has been anathematized as "heretical," and the Voynich manuscript has been deemed "too sophisticated" to have been produced by people practicing a heretical belief system. Does this mean, then, that during the 15th century solely monks and Renaissance humanists produced anything worth reading? Do you see how we are right back to searching for our great male hoaxer?

While it is a known fact that much of Europe indeed committed centuries of genocide and systematic cultural oppression to eradicate all but Christian belief systems, a bit of an anomaly occurred in Finland:  a RELATIVELY kinder, gentler cultural appropriation.

Here is where the Voynich women and their faith went.

In a shamanistic rite where they are visiting the upper world of Finnish mythology, the women in the Voynich manuscript are celebrating and making obeisance to the giver of life, rain, and abundance, Ukko and his wife, Rauni. Medieval church murals in Finland contain traces of the same pre-Christian belief system.

Posted by Claudette Cohen at 3:48 PM