There's quite a clear language used throughout the Voynich manuscript, but as much as any extinct dialect, centuries of hubris and narrow vision, and an inability to see past the nakedness of the women depicted in its pages have obscured the meaning of this work.

Simply by what they were wearing on their heads (women's headdresses— sorokk, lakkipaikka, cäpci, twarda mycka, rogatywka, wianek), these women would have known much about each other, for example, where they were from (down to the very village), whether they were married, and what social standing and function they had within their communities. Take, for example, Latvia.


It was a long-standing tradition in Latvia that the type of head covering worn indicated a female's marital status.  The symbolic covering for an unmarried maiden was a wreath or crown (vaiņags). (In Liv regions, a ribbon served the same purpose.) The actual style of wreath, the materials, and the pattern of embroidery used would vary significantly from region to region, but the practice of wearing a vaiņags at festive occasions was consistent across Latvia.

On the other hand, married women typically wore caps, or elaborate head cloths, with a festive folk costume.

These head coverings were used for festive wear, as both married women and single girls would wear homespun head scarves for daily wear.


The female images are very interesting, and the only artifacts to draw on for linking their appearance is the hair and headdresses. They are not very detailed, however, so all we can say is that the caps and crowns resemble those worn in Eastern and northern Europe. It does seem that both maidens (as indicated by crowns and wreaths with hair visible) and married women (signified by caps and veils that cover the hair) are present.

The contemporary photos below are of women from all over Europe: Poland, Lithuania, Serbia, Slovenia, Russia, Karelia, and more. This suggests that women from different regions in Europe may have journeyed to these watery caverns for some ritualistic purpose. That is, they may have been on that quintessential medieval venture, the pilgrimage. 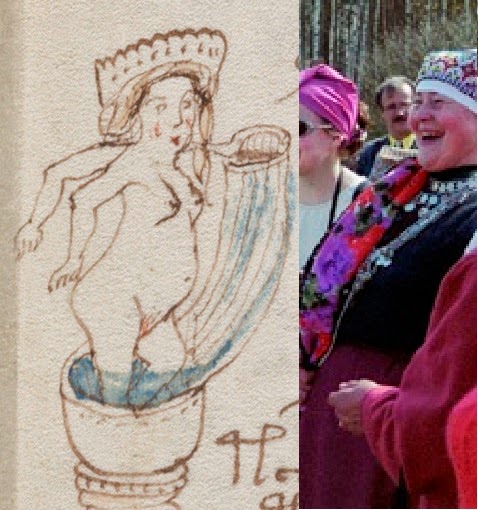 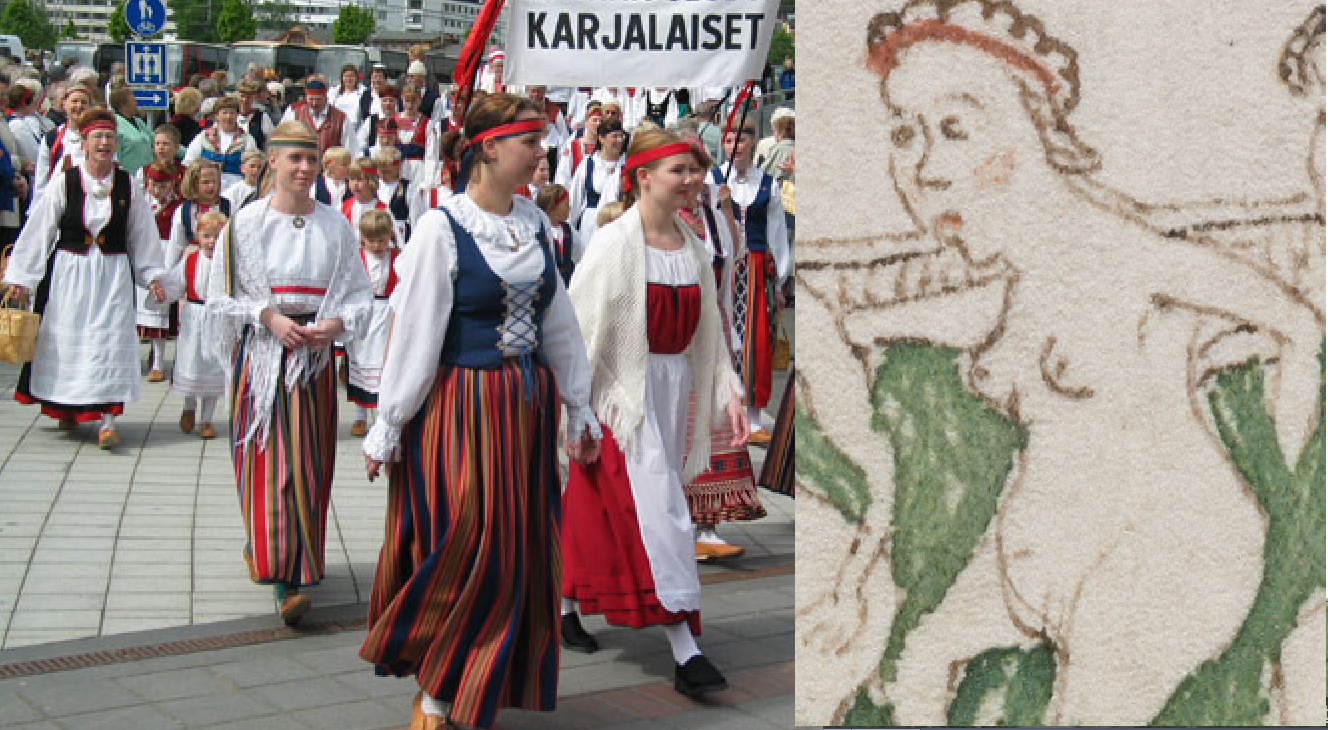 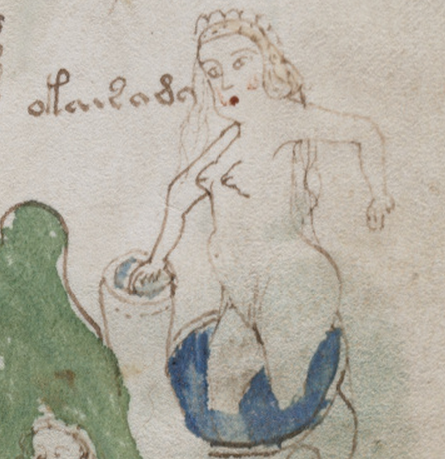 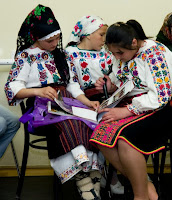 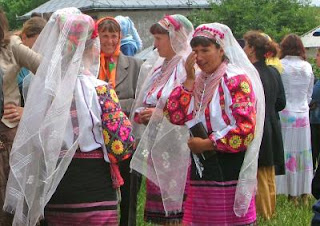 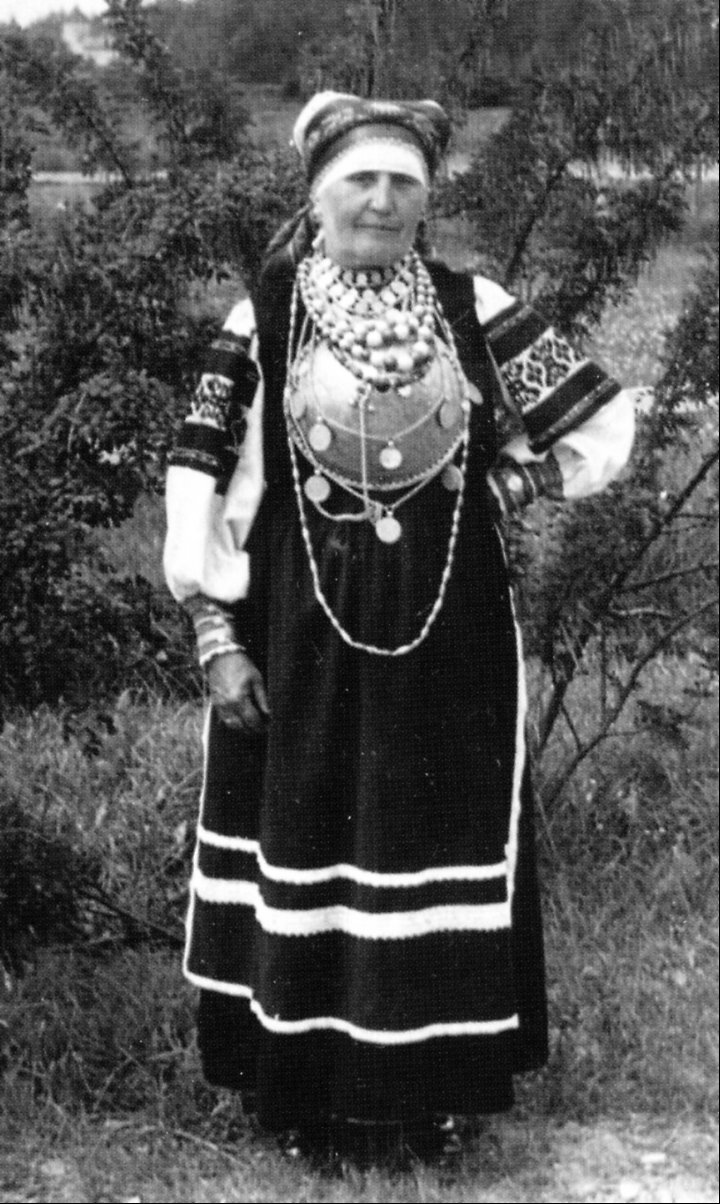 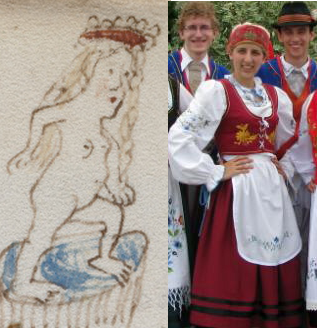 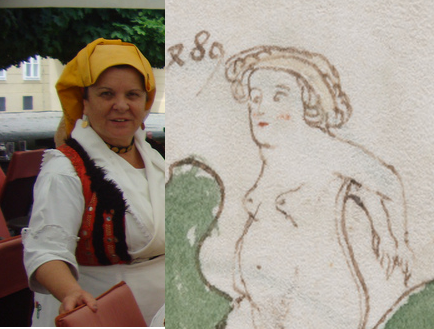 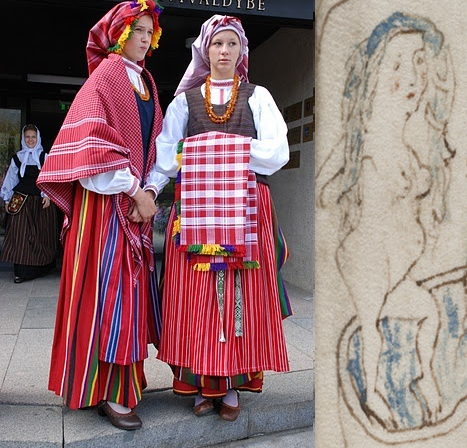 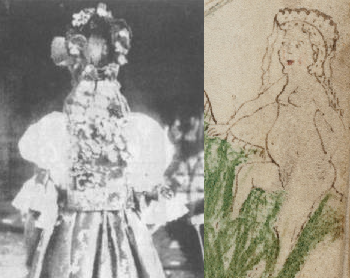 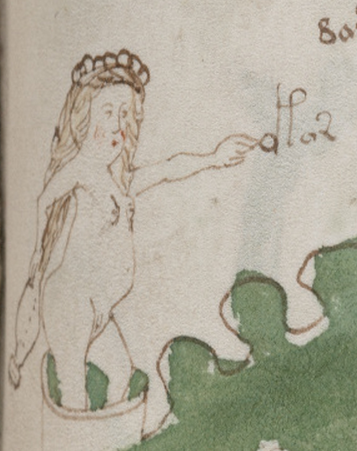 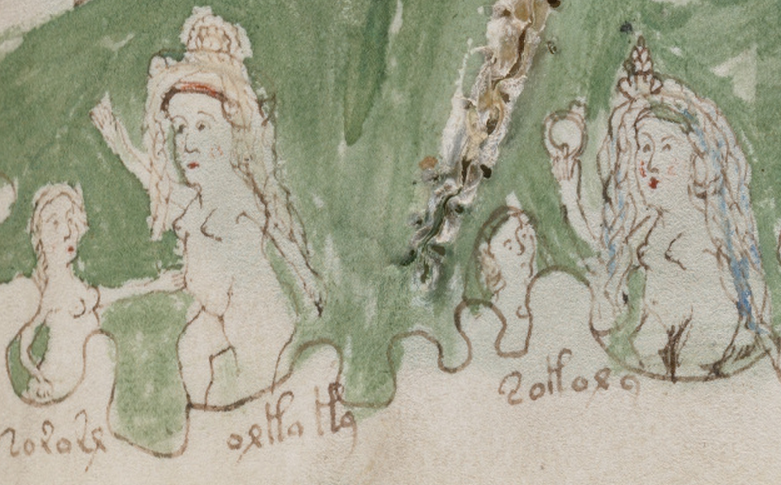 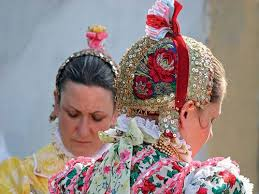 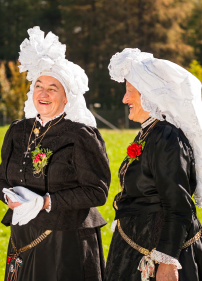 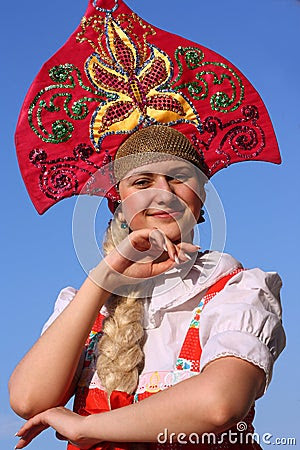 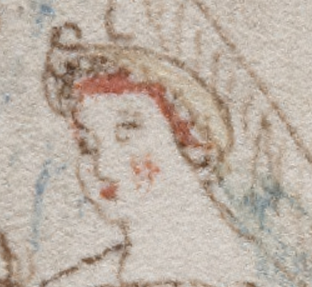 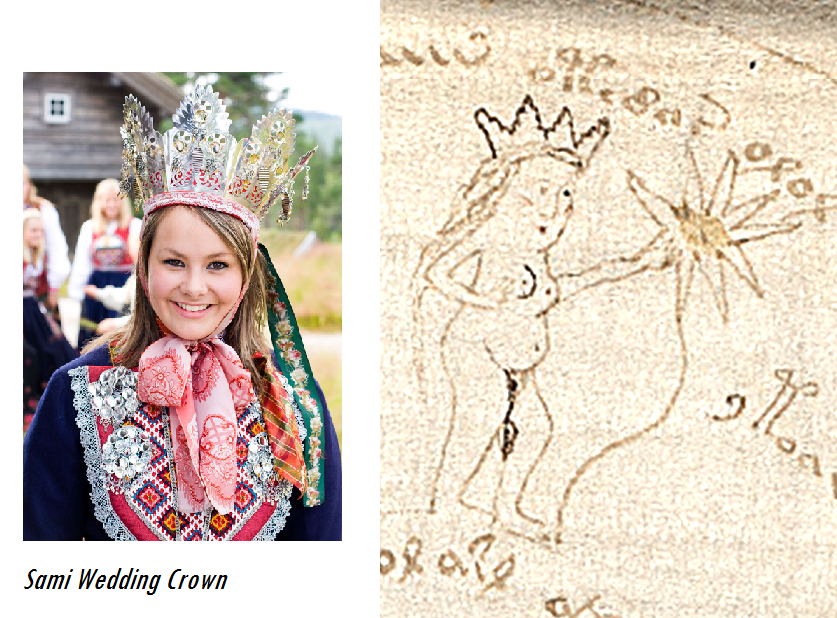 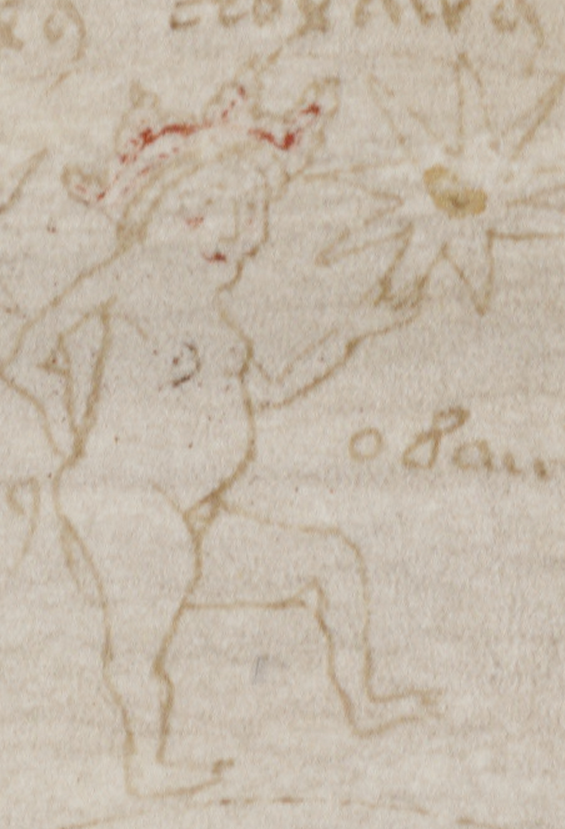 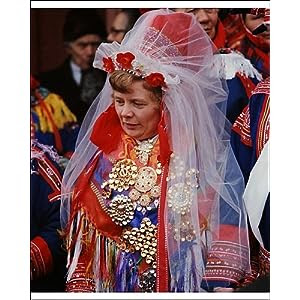 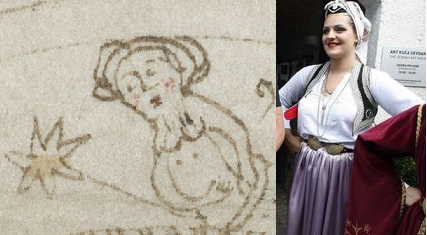 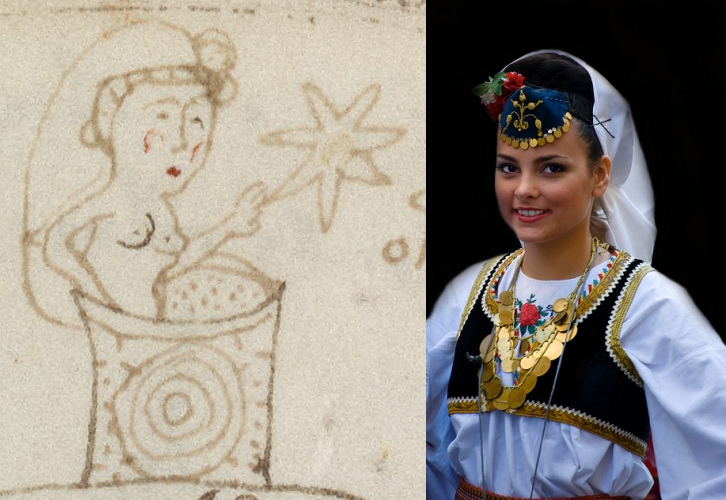 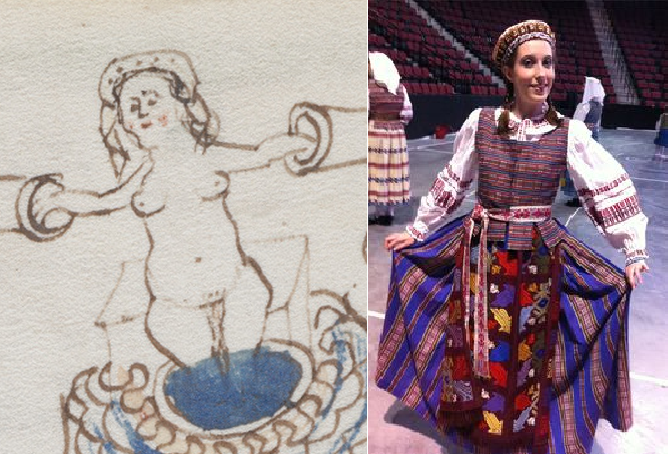 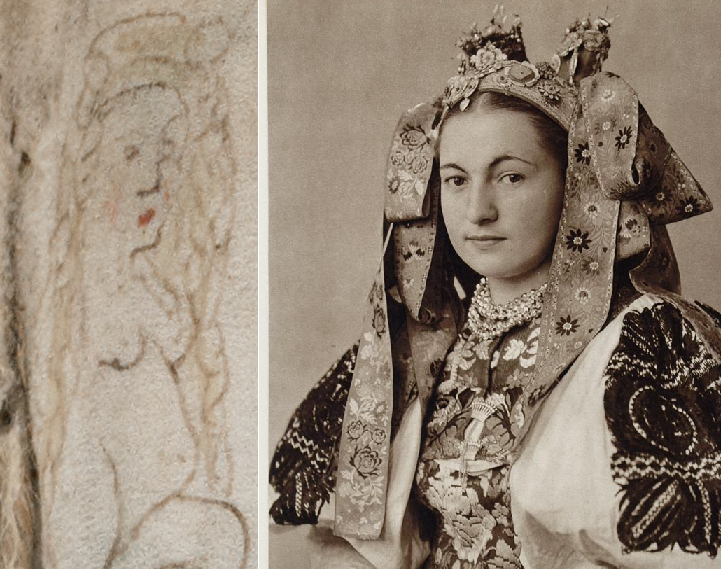 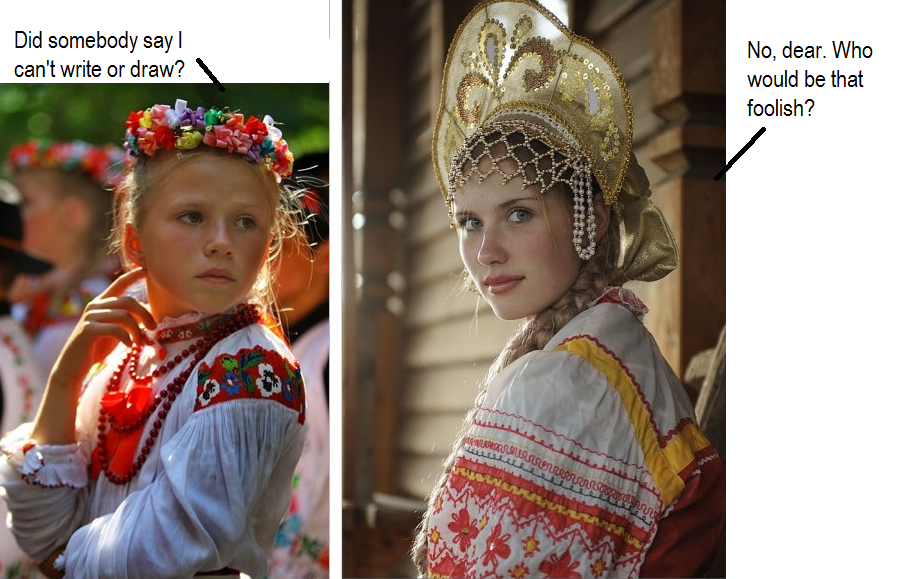 Honestly, it doesn't take a scholar or any sort of intellect to figure this one out, just a savvy woman. In fact, when it comes to the Voynich the tendency has been to shoot way too far into speculations of astronomy, alchemy, and cryptography, so much so that, again, these women become invisible. Not every depiction of a nude female is put there to stir the male loins, or even inspire him intellectually, and the head coverings in the Voynich manuscript are a clear clue that something else may be going on. 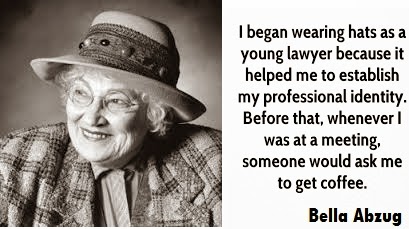 I have a hat. It is graceful and
feminine and gives me a certain


dignity, as if I were attending a
state funeral or something.
Someday I may get up enough
courage to wear it,
instead of carrying it
... Erma Bombeck

Throughout history, hats have been a way for women to signify.

In his influential study The Functions of Folk Costume in Moravian Slovakia, Petr Bogatyrev argued that peasant clothing may be interpreted as a language that communicates a number of functions:

Posted by Claudette Cohen at 10:45 AM