Seidr Staffs and the Voynich

Seiðstaffs of the völur (Old Norse seeresses) are based on the design of distaffs. This symbolism ties in the shamanic staffs with the Spinning of the Norns, with fate-weirding actions, and it also helps to explain the intense female gendering of seiðr, the entranced ceremonies referred to in the Edda and sagas.

Ynglingasaga says that Freyja "was a blótgyðja [sacrificial priestess]; she was the first to teach seiðr to the Æsir, as it was practiced among the Vanir.” [Ynglingasaga 4] In the same poem, Snorri claims this "greatest power" for Odinn; “But this sorcery [fjolkyngi], as is known, brings with it so much ergi that manly men thought it a shame to perform, and so this skill was taught to the priestesses.” [Ynglingasaga 7]  --Max Dashu, Witches and Pagans, forthcoming 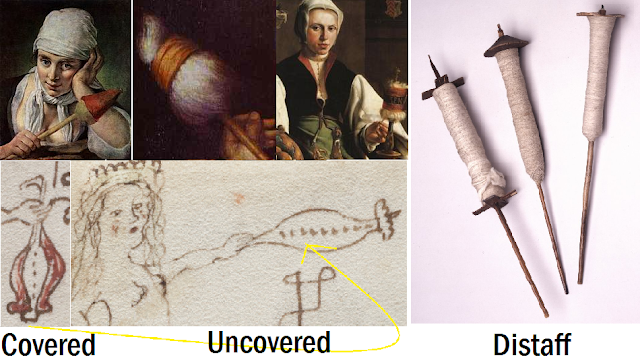 German engraving (1450-1467) of a tournament between man and woman; to the left, a naked man rides a unicorn, holding a rack as his armour; his opponent is a woman on a horse to the right, equipped with distaff; the entire background is covered by ornamental foliage, on which three birds are placed. 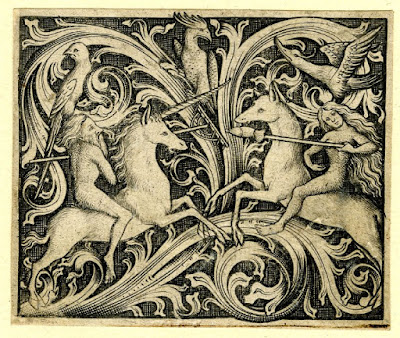 Posted by Claudette Cohen at 10:31 AM