The What They Sound Like post examines the use of alliteration throughout the Voynich's text. Words beginning with "el" especially occur so frequently that this trend demands its own post.

Anu Saagim offers this explanation: Finnish "elo" translates to English as life, living or crop (although this is a bit old-fashioned), as in harvesting of a crop. Finnish "elonkorjuu" thus literally means "crop"-"harvest."

A similar construction occurs in Estonian, described below. 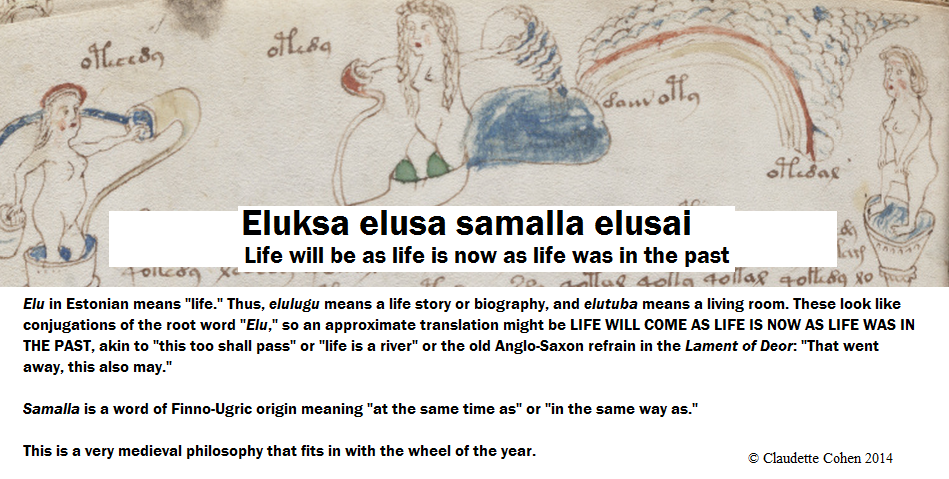 In this case, is Elukka being used to mean animus or soul: immaterial essence, animating principle, or the actuating cause of individual life? Does all the water then become a symbol for that animus--the omnipresent immortal sentience which runs through beings beyond their own seemingly isolated refrains of life and death?

There may be inherent biases being applied to the Voynich manuscript that have so far stymied efforts to make sense out of it. First is the gender bias discussed in The Mystery is the Hoax. Second is a language bias against the non-Indo-European/Latinate, as illustrated in the cartoon below: For scholars who may pride themselves on fluency in Latin, Greek, or Arabic, wandering about in Finnish could be a bit of an off-road experience.

Finally, the transcriptions that researchers have come up with and obstinately stick to derail the potential to derive meaning from the text in any language, giving rise again and again to scholars throwing up their hands and pronouncing it all "gibberish." No, they're seeing that "a" as a "9."

The suffix of "el" may serve as a central key to cracking the Voynich once and for all. It's at any rate worth more exploration.

Posted by Claudette Cohen at 12:12 PM