The Para: An Example of Folk "Magic" and Natural Science 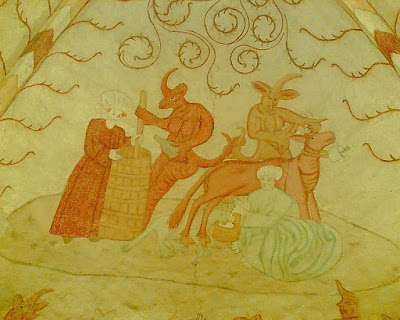 You may have read the post about Ukko and learned that his other name, Jumala, had started out meaning simply the heavens, and then meaning a god of heaven, and then finally God. This action of anthropomogrifying non-anthropic beings may be seen as one of the most prevalent sea changes brought about by the Church. Another example is here, with what appears to have started out as an animal deity, the Para, which then becomes demonized, and given anthropic features perhaps to make it look funny, absurd, evil, freakish, and unpleasant.

What does the Para have to do with the Voynich manuscript? A charm song for the Para is listed among others, as follows:

Not only is he mentioned, but the little guy might even make an appearance in the manuscript. Hint: he doesn't look much like the Paran painted on the walls of St. Lawrence Church in Lohja, Finland, and he doesn't help actually milk the cows. The nature of his aid could be a bit more subtle.

Para (Sw. Bara or bjära) is Finnish and the Swedish folklore known as a farm or a house holder of a kind elf, and also the owner apuolento. However, Para, unlike modern-day stories graciously elves often described as a fearsome look and mightily being. Paraa is typically described as a round ball of yarn or birch bark roll look, but in addition to para could also be a feline form of a bird or frog. The spherical shape was more common in the Swedish tradition and an animal figure in Finnish. Paran task was to help the house and the owner, and the increase of wealth. Parat often went to steal other people's property or families or milk from their cows, and brought it to her mistress or master. Para and its owner were in contact with each other so that if Paraa damaged, it will also be posted injured.

Lohja church armory vault painted a picture in which a witch milked, assisted by improved cow. Adjacent to another woman churning butter beside him to have been stolen from improved milk. 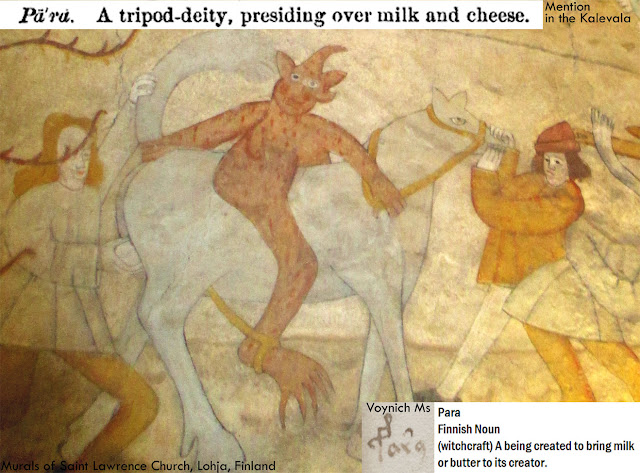 Paran could own especially the witch. The witch persecutions of people have been accused of owning improvement. The walls of churches in Northern Europe and Finland sometimes described as a witch by churning improvement or other similar apuolennon stolen from milk, apuolento side. Such a scene is also Lohja church wall, Parat which are described in unicorns, isokorvaisia ​​devil-like creatures.

Para arrive when called to assist the people of the house, or wife, but also requires the services of, respect, and food. Paran was able to call help if, for example, knew the right spell. In a story of this kind of spell was:

No para, para created!
It is not seeing eye,
And to pay to hear!
Another version:

St. John's night was the granary keyhole to listen to would fall within your grain counting. If you would, then there would be para to calculate the mass of grain, and the case should be a good harvest. However, if the coffers kilisisi to himself, then para to the money counting, and livelihood would be secured.

Seskar and Lavan Island para known as butter, milk and kananmunavarkaana which was browner than a squirrel.

Paranvoiksi named a slime suspected of being in folklore from the fact that the para disturbed vomit out of the kähveltämästään butter. Therefore, paranvoita is also called paranpaskaksi or -oksennukseksi.

Paraa could not damage the bullets, but if it was able to kill, it was also followed by the death of its owner. The remaining best was only three burnt stick.

The shamanic cultures all over the world are familiar with Paraa-like holders and apuolentoja, and apparently this kind is well known in Finland long ago. Paran was considered to be emerged vicious soul, and to be the soul of the animal. The Witch, therefore, self-improvement walked likeness. It was a witch then the conscious self, do not let the writings of clarity.

In Sweden, told the witches receiving paransa Satan while visiting Blåkullassa. In Finland, it was considered that the para prepared, for example, by placing a ball of yarn or in some way the spindle's heart wafers. Ready for moving in Para took the character of the animal.

The Possible Science behind the Myth

I'm not sure where that origin piece was going, BUT at this point it is almost impossible to tell how much of the Para myth is post and pre-Christian, but a devilish spin does seem to have been put on the character of the Para. That said, let's go back to why such a being might in any way be seen as beneficial, even lucky. First of all, let's say this drawing that has been called an armadillo and a pangolin is in fact a wet little water vole and the dripping from his pillow isn't some weird alchemical elixir of life: it's just water. 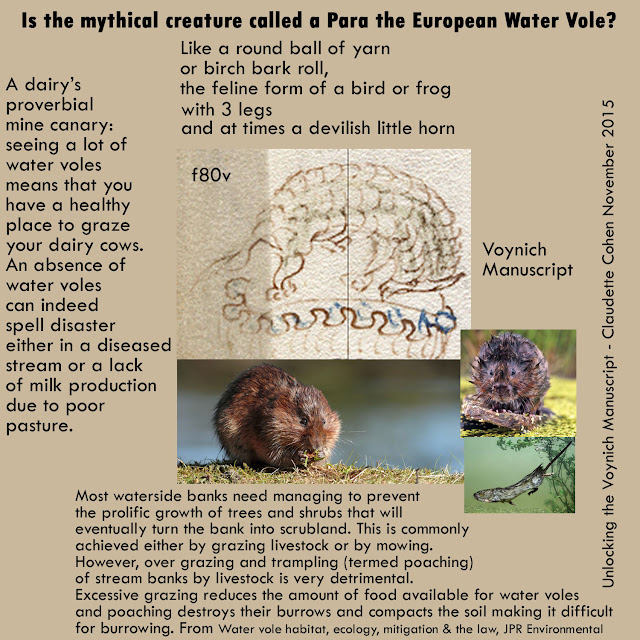 Here's more from JPR Environmental on the European water vole:


Once a common feature on most watercourses in the UK, water voles (Arvicola terrestris) have suffered a dramatic decline over the last 100 years but particularly during the last 30 years. Water voles favour slow-flowing, narrow water courses about 1 m in depth that do not fluctuate in water level through the year. Mud or clay banks and with plenty of bank side emergent vegetation is needed for burrowing, feeding and cover.

Happy Water Voles to You

A thriving population of these little beasties spells a great place to graze your cattle, so it stands that they were medieval good luck omens. Sometimes, magic is just reading the nature in front of you and deciding your actions based on empirical observation. It certainly wouldn't do anyone any good to steal somebody else's water voles, BUT if you killed them, you certainly weren't helping yourself out.

The creature on the pillow could be another aquatic rodent whose habitat is throughout Europe, Castor fiber, the European Beaver, and its value may be seen not only changing the environment to create ideal watering holes for cattle but also in a substance that was extracted from its glands even as far back as the early middle ages. 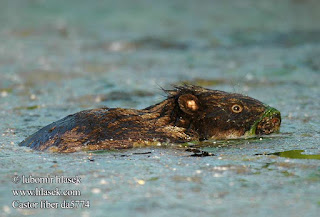 Castoreum was still in the materia medica in the 18th century as a treatment for many ailments—including headache, fever, and hysteria. The Romans believed the fumes produced by burning castoreum could induce an abortion. Paracelsus thought it could be used in the treatment of epilepsy. Castoreum was also used as an analgesic, anti-inflammatory, and antipyretic. Castoreum was described in the 1911 British Pharmaceutical Codex for use in dysmenorrhea and hysterical conditions (i.e., pertaining to the womb), for raising blood pressure and increasing cardiac output. The activity of castoreum has been credited to the accumulation of salicin from willow trees in the beaver's diet, which is transformed to salicylic acid and has an action very similar to aspirin. (Wiki)

The majority of medicinal herbs used in the Swedish collection have a strong smell (for example, myrrh, myrtle, juniper, mustard), which is employed in practically all the treatments for mental ailments. The only recipe ingredi-ent made from an animal, castoreum, from the beaver's castoreunt pods, has a very powerful smell and was utilized for insomnia. The Occitan collection also includes plenty of aromatic herbs and flowers (basil, thyme, oregano, sage. rosemary, dog rose, to name a few), but the range of ingredients used is much larger, which makes comparison difficult.


And yet another candidate

A Russian Desman (Desmana moschata) is a small semiaquatic mammal that inhabits the Volga, Don and Ural River basins. Decidedly rich and thick in nature, desman fur used to be highly sought after by the fur trade. 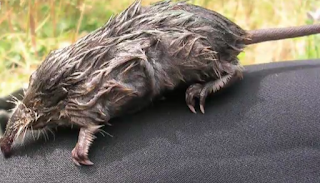 Desmans belong to the same family as moles but are adapted for a more aquatic lifestyle. They posses a similar long, cylindrical body, but the tail is longer and flatter than that of a mole and is broadened by a fringe of stiff hairs (3). The legs are also covered in stiff hairs and the thick, waterproof coat is brownish-red in colour, fading to ashy-grey on the underside (2) (3). The snout is long and flexible and the back feet are completely webbed in order to provide propulsion in water. 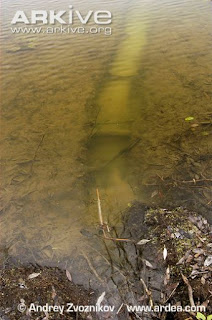 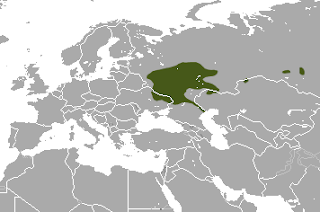 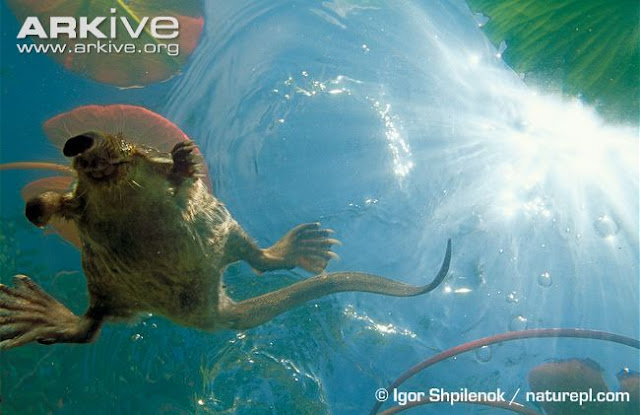 The pillow holding the little creature in the Voynich manuscript is dripping, signifying that whatever rests on it is most likely wet. Therefore, the pattern on the back of the creature does not have to be scales and probably is not. It's the clumped, wet fur of a rodent, perhaps the water vole or the European beaver, both serving a beneficial role during the Middle Ages either as the maker and indicator of ideal grazing grounds or as the holder of a prized healing ingredient. Lauded in north European folklore, the para later became demonized by the Church into an anthropomorphic monster meddling in the milk production industry with witchcraft.