Much ado has been made out of the swallowtail crenellations that are depicted on the rosette map. Indeed, this depiction of a castle or fortress in the Voynich manuscript's Rosette fold-out shows a certain type of merlon quite prevalent in northern Italy during the 15th century, which indicates the Ghibelline side of two warring Italian factions. 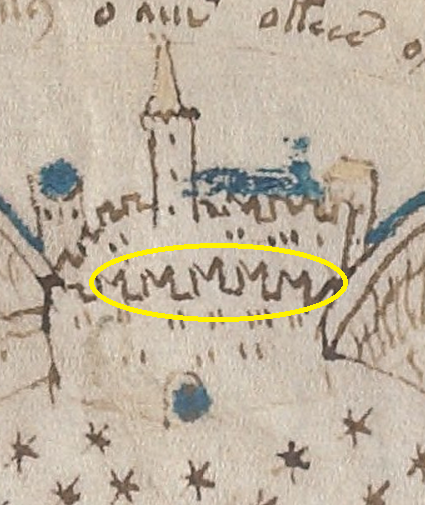 Here are Guelph and Ghibelline getting enough of each other in Dante's Hell. 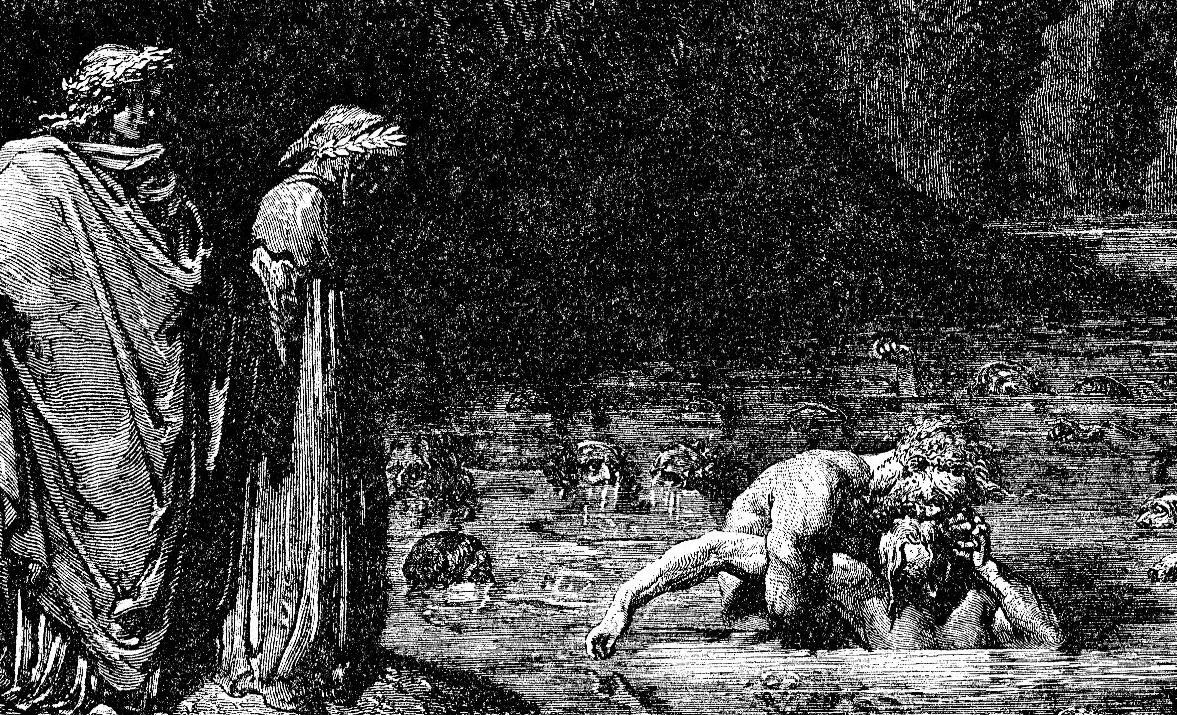 Does this prove the manuscript originated in northern Italy?

Diane O'Donovan points out that this swallowtail style may have sprung from an indigenous and originally Achaemenid Persian style.

Here are examples of merlon styles with Vs in them from various places around the world. 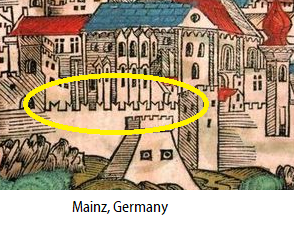 Swallowtail crenellations are as much in Russia and elsewhere in Europe as they are in Italy.

Many multi-domed buildings were constructed in Russia during the 15th century. The revival of bricks in many constructions were seen in regions like Novgorod and Pskov. The first cathedral in the Moscow Kremlin complex was constructed in this period. There was also a fall in wooden constructions, as the then Tsar Ivan III ordered demolishing of all wooden structures that were surrounding the Kremlin. Glimpses of Italian influence can be seen in Russian structures of the 15th century. (From A Summary of the Truly Splendid and Opulent Russian Architecture)

All of this just confirms my earlier opinion that any resemblance of the VMS features to the "humanist hand" or Italian architecture of any type does not "prove" that it originated in Italy or even that region. Italian scholars and artists of the 15th c. were everywhere - especially in central and eastern Europe.

Another reason why crenellations are not as helpful as one might assume in identifying the location of a castle is that they are not the most durable part of a fortification. They get bombarded, eroded, and dispensed with in a redesign. 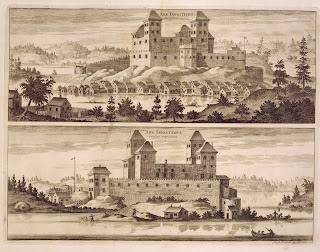 There is yet another reason you cannot rely on the swallowtail crenellations as an indication of any sort of origin for the Voynich manuscript. These appear on a map. Maps usually are drawn by people who travel. So who can say whether the person drawing a castle with swallowtail crenellations was drawing their home or some landmark in their travels? This would seem a no-brainer, as would hundreds of blonde women sweating in a sauna pointing toward, oh I dunno, maybe...Finland...? Just a wild guess, but hey, knock yourselves out trying to find the Chai.

What about when everything else falls into place and there are swallowtail crenellations? 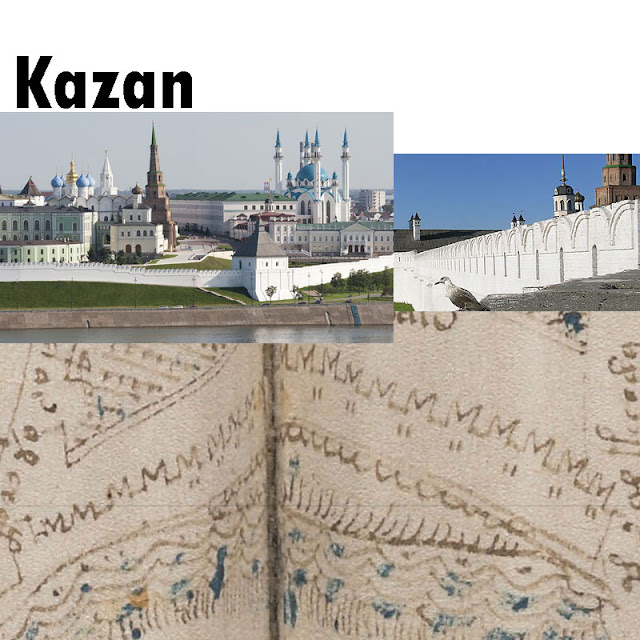 Khanate of Kazan on the upper Volga, 1441

The Volga, Kama and Vyatka were the main rivers of the khanate, as well as the major trade ways. Peoples subject to the khan included the Chuvash, Mari, Mordva, Tatar-Mishar, Udmurt, and Bashkir. The Permians and some of the Komi tribes were also incorporated into the Khanate.

Other than the crenellations, is there any additional outstanding architectural feature in the castles that may hint to the area of origin?

This is the sort of architecture for which Karelia and all of Russia is renowned. I don't believe this circle of onion domes is supposed to represent one building or even one city but rather the Golden Ring of Russia itself. 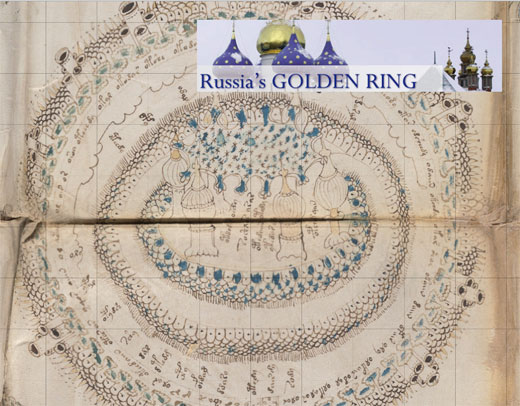 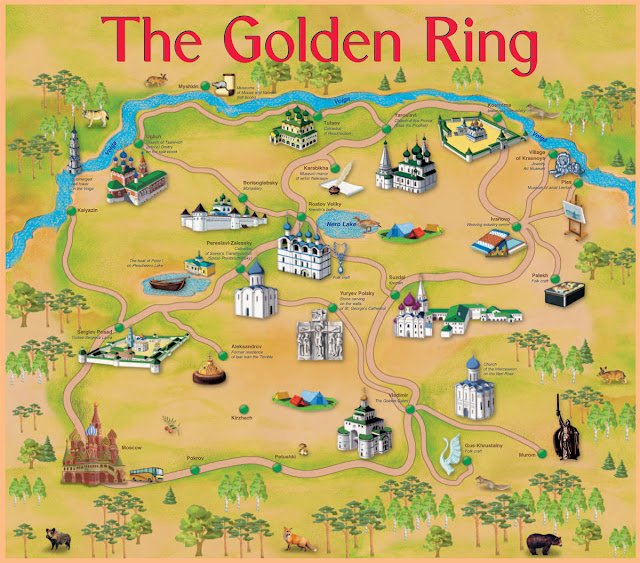 Red coned roofs crown a plethora of castles from Lithuania to the Czech Republic.


All this goes to say that the architecture in the Voynich Manuscript spans Europe because the map itself spans several countries. It cannot be relied on solely as a locator for the distinct origin of the manuscript. It certainly nails down Europe, but any further specifics as to origin require looking elsewhere inside the manuscript.
Posted by Claudette Cohen at 1:01 PM