The Voynich and the Spring Thaw

So let's guess that the woman to the right isn't simply a bit of marginalia but actually part of the content and message of the book, and therefore, if we do not dismiss her, able to tell us something about what the authors meant to convey. What might it be? Well, for starters, her face, you might have noticed, is extremely red.

Let's look at the rest of the picture. We can see that she's paired with another woman who is not half as red-faced and in a smaller receptacle that is not producing as much water flow. 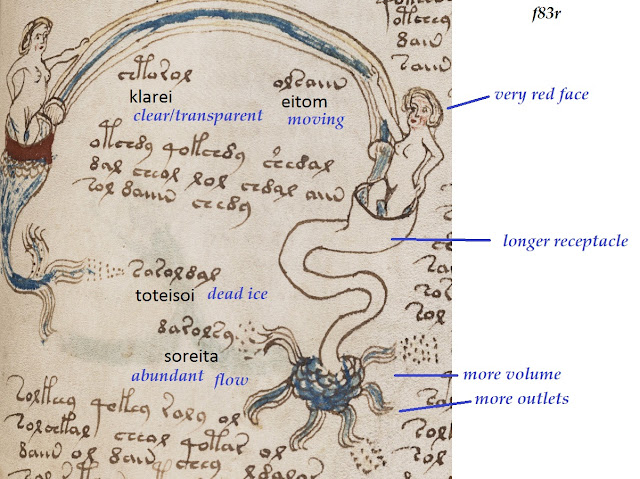 It could be a depiction in human terms of how ice breaks up in the spring to become water flowing in the rivers and streams, or it could be a visual cue for women who performed some spring ritual to invoke the sun to melt the ice and restore the water to the land after a long winter. Sir James Frazer wrote about these rituals in his seminal book, The Golden Bough, as discussed in the post titled Water and Ritual. We can see in the imagery and text of the Voynich, in keeping with many folk traditions around the world, that the most important ceremonies were related to turning points in the annual cycle. like the spring thaw, as well as the traditional rites in people´s lives, such as childbirth.

So where am I getting the translation of the words? First of all, I have my own transcription alphabet, which you can find here.

Second, I know by now that Voynichese is mostly made up of words that go back to proto-Finnic and proto-Norse/Germanic roots with some Slavic influence. It's Baltic, maybe an extinct Swedish Estonian, or Kven, or Livonian dialect. Other influences are at best trace.

Posted by Claudette Cohen at 8:26 PM