The Herbal Jars in the Voynich

The Voynich manuscript contains several drawings of containers that were apparently used to store and carry medicinal powders from the roots depicted beside the containers. 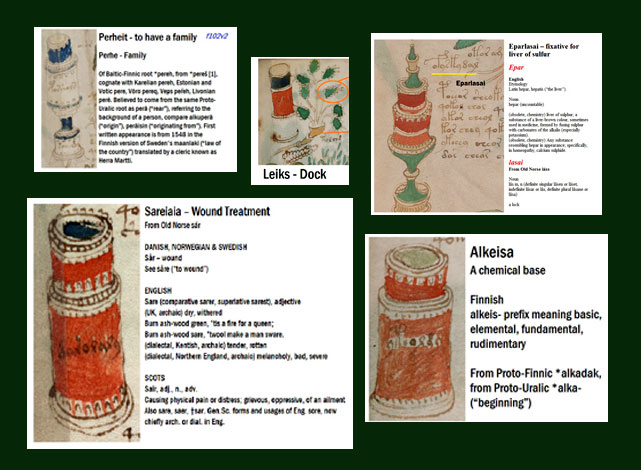 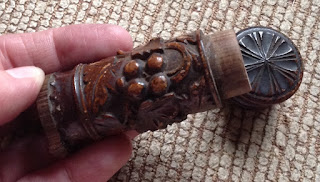 The photographs above are of a carved wooden needlecase, possibly once painted. The finder believed it to be from Victorian Bavaria.

Treen, literally "of a tree" is a generic name for small handmade functional household objects made of wood. Treen is distinct from furniture, such as chairs, and cabinetry, as well as clocks and cupboards.

Salt cellar, The National Museum of Finland
The salt container is a horn, cover and base made of wood. The cover has a leather strap which is threaded metal and bony ring. The bottle is decorated with a ribbed surface with Diagonal in width, depth and distance relative to each other varies

Salt container; birch bark container
The National Museum of Finland
Tuohinen salt jar. Side is on top of a number of knurled birchbark strips. The base is wooden.

Before the late 17th-century, when silver, pewter, and ceramics were introduced for tableware, most small household items, boxes and tableware were carved from wood. The herbal jars in the Voynich appear to be turned, carved, and painted wood. Below are some of the Voynich manuscript jars beside treenware (spice urns, necessaires, and needle cases) created in various European countries. 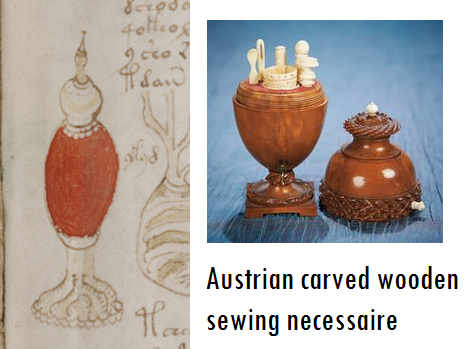 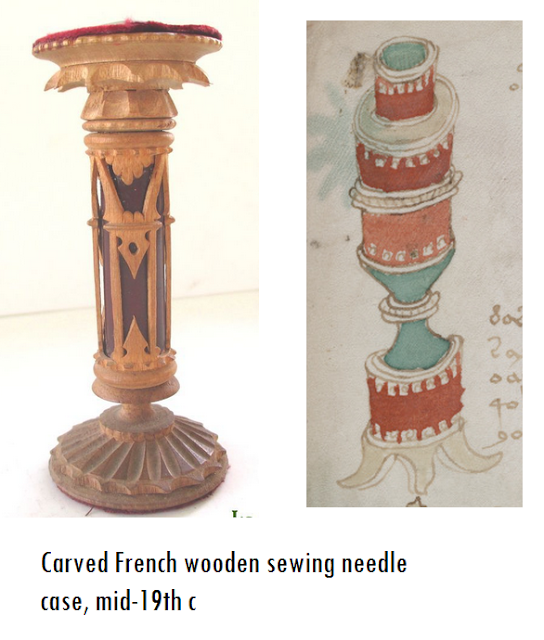 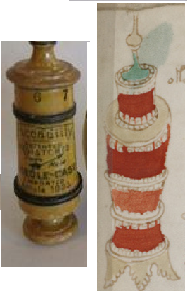 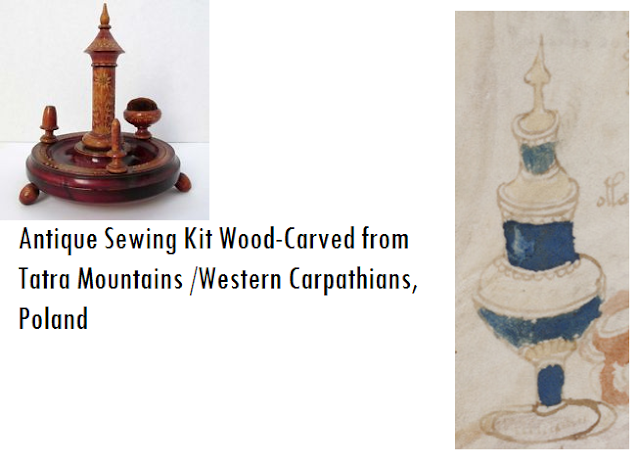 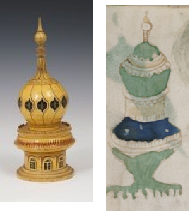 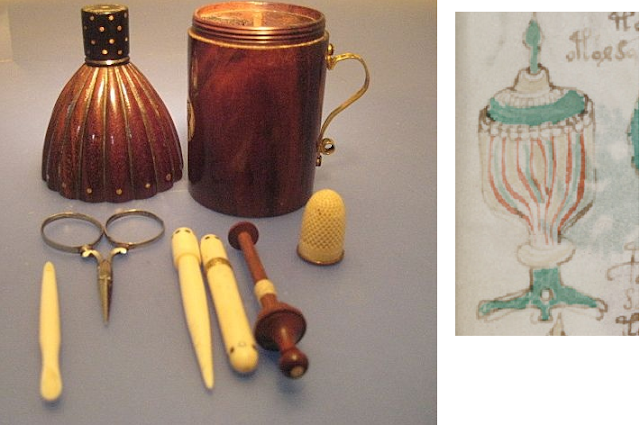 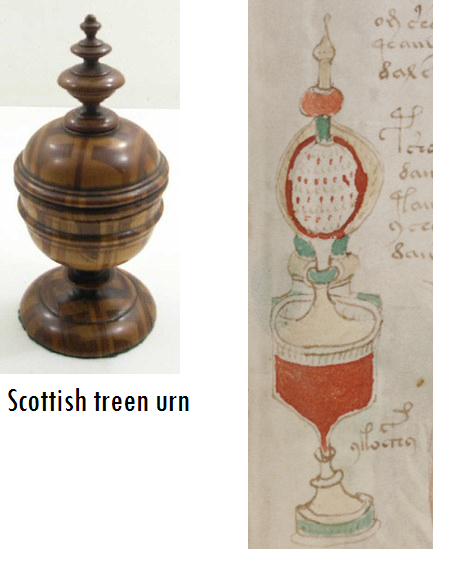 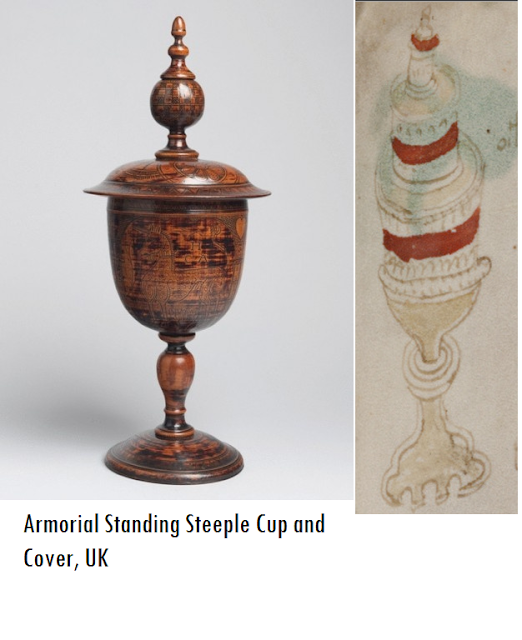 Quite a few of the Voynich herbal jars have feet such as these three steins below, which were made in Norway. However, the Voynich side patterns appear to be similar to the round box in the lower left, which was made in Poland. 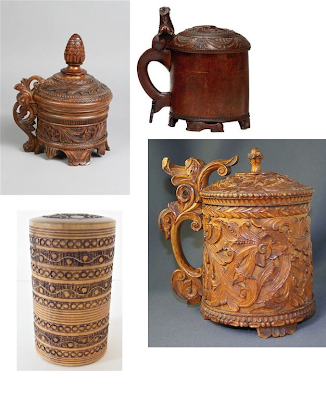 Below is a typical Italian renaissance apothecary jar. They very often have portraits and lettering, and the shape tends to be either cylindrical or stout. Here, angels, dragons, saints, and portraits are used to embellish, whereas the decoration on the Voynich jars, like the Polish wooden box above, stays cleanly non-figurative. 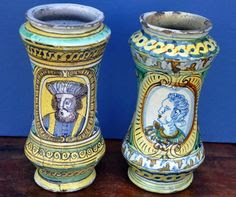 Some have also suggested that the Voynich jars are Egyptian perfume bottles like the one below. 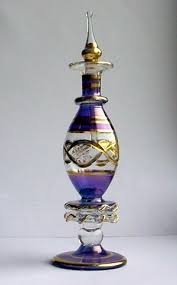 Certainly we are getting closer to the curvier shapes of the Voynich containers. However, glass would have been outrageously costly. In addition, the neck of a glass perfume bottle would make it difficult to insert or extract the roots depicted beside the container, even were they to be ground to a fine dust. Finally, nothing else in the manuscript points to any connection with Egypt.

Where the Voynich manuscript was written, wood was far more plentiful and less costly than glass or the fine clay needed for ceramics, and the countries in the Baltic region and Scandinavia have been fine craftsmen in wood for centuries before the Voynich was written.
The objects appear to have been turned on a lathe and subsequently carved and painted. 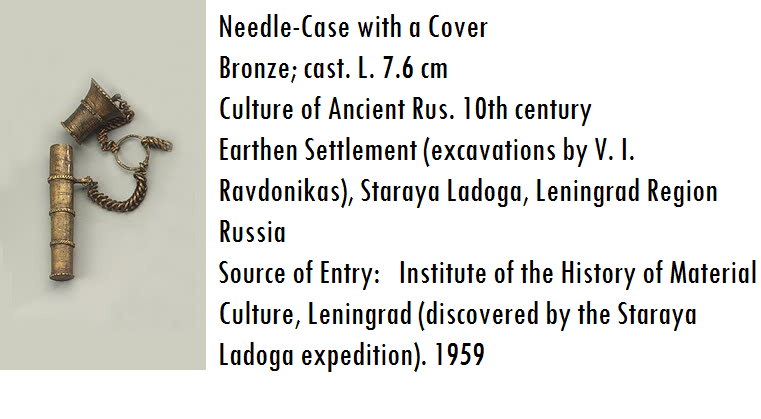 Made from various materials, sewing kits with needle cases like the 10th c. bronze one above were popular up to the late 19th century. The women of the Voynich may have gutted and then used their sewing necessaires to store roots and then used the needle cases to carry the medicinal powders. A precedent for carrying a belt with such implements as powder containers, needle cases, spoons, etc. may be found among the Sami, who have for millennia crafted such beautiful item they call duodji. These often hang from a belt. 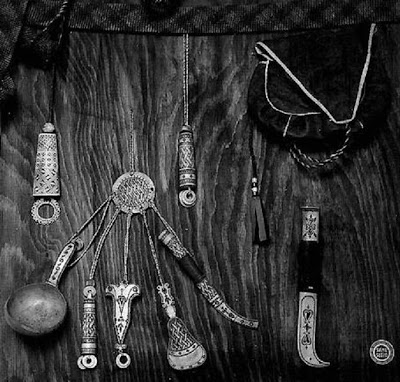 It is past time to re-examine Norse, Balto-Finnic, and Germanic culture especially with an eye to the potential extent to which the Sami have influenced them. I do believe many innovations and traditions attributed to the Norse made their way into that culture via the ancient Kvens' adoption but also appropriation and exploitation of Sami culture. The Kvens themselves were subsumed beneath later migrations from the South so that this link became forgotten, but the echoes remain. Here I discuss further Sami influences found in the Voynich manuscript.

The containers have terms related to what the concoction would be used for. For example, it may be a base used in blending active agents, or its purpose could be to boost fertility or help in healing a wound or a remedy for a certain ailing organ. The plants, on the other hand, appear to be labeled with their common (folk/local) names, perhaps at times just a characteristic of the plant, and nothing else. Again, this is 15th century folk medicine. To read it requires forgetting Linnaeus, botany, modern medicine, and, though not all, most of Latin. 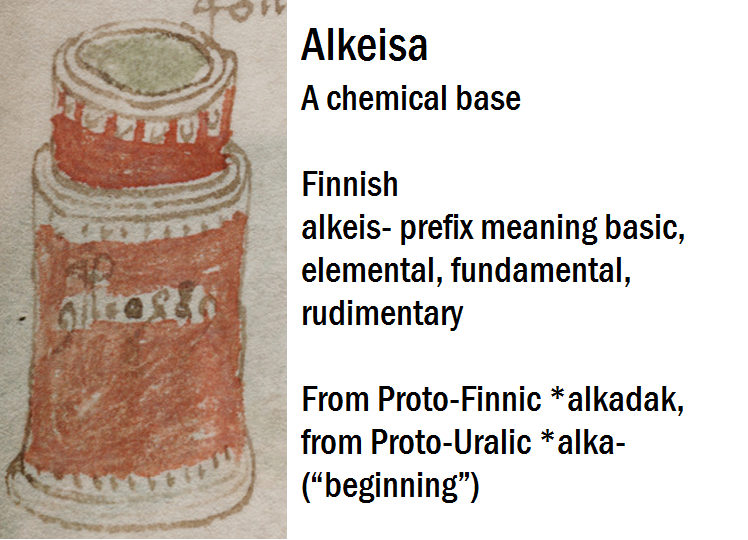 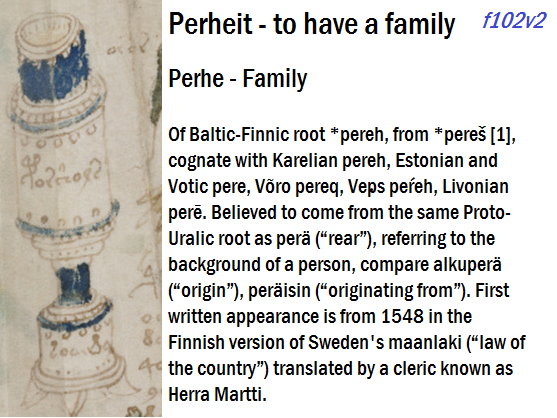 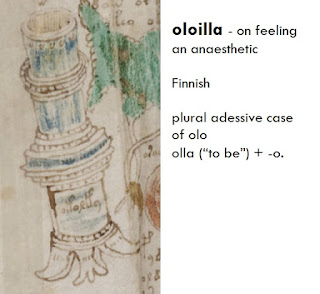 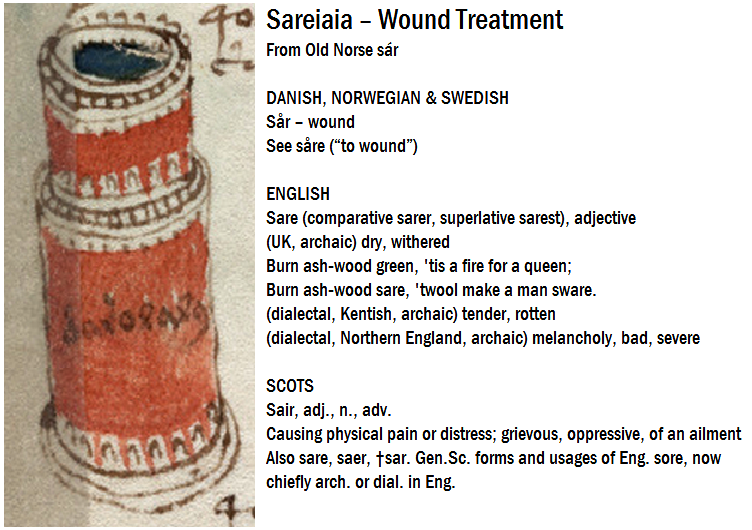 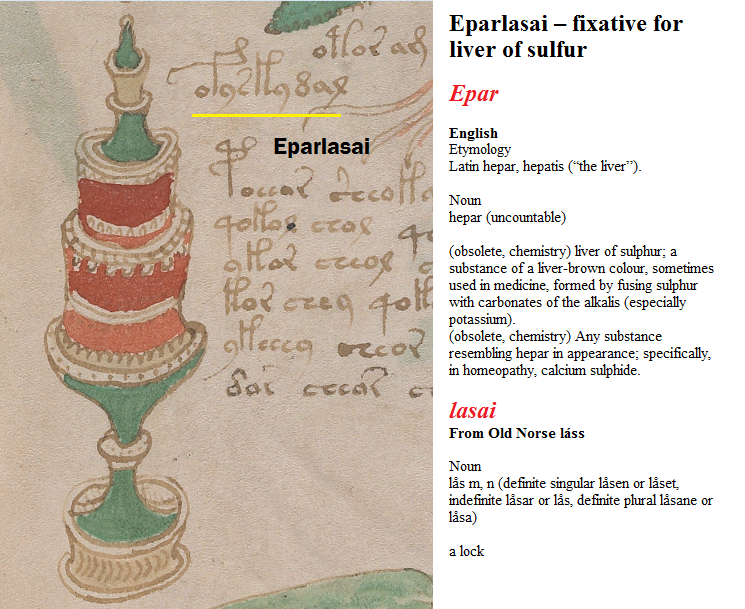 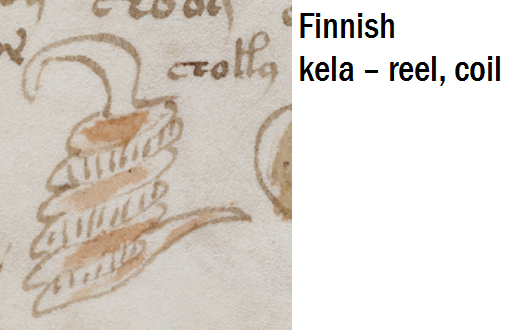 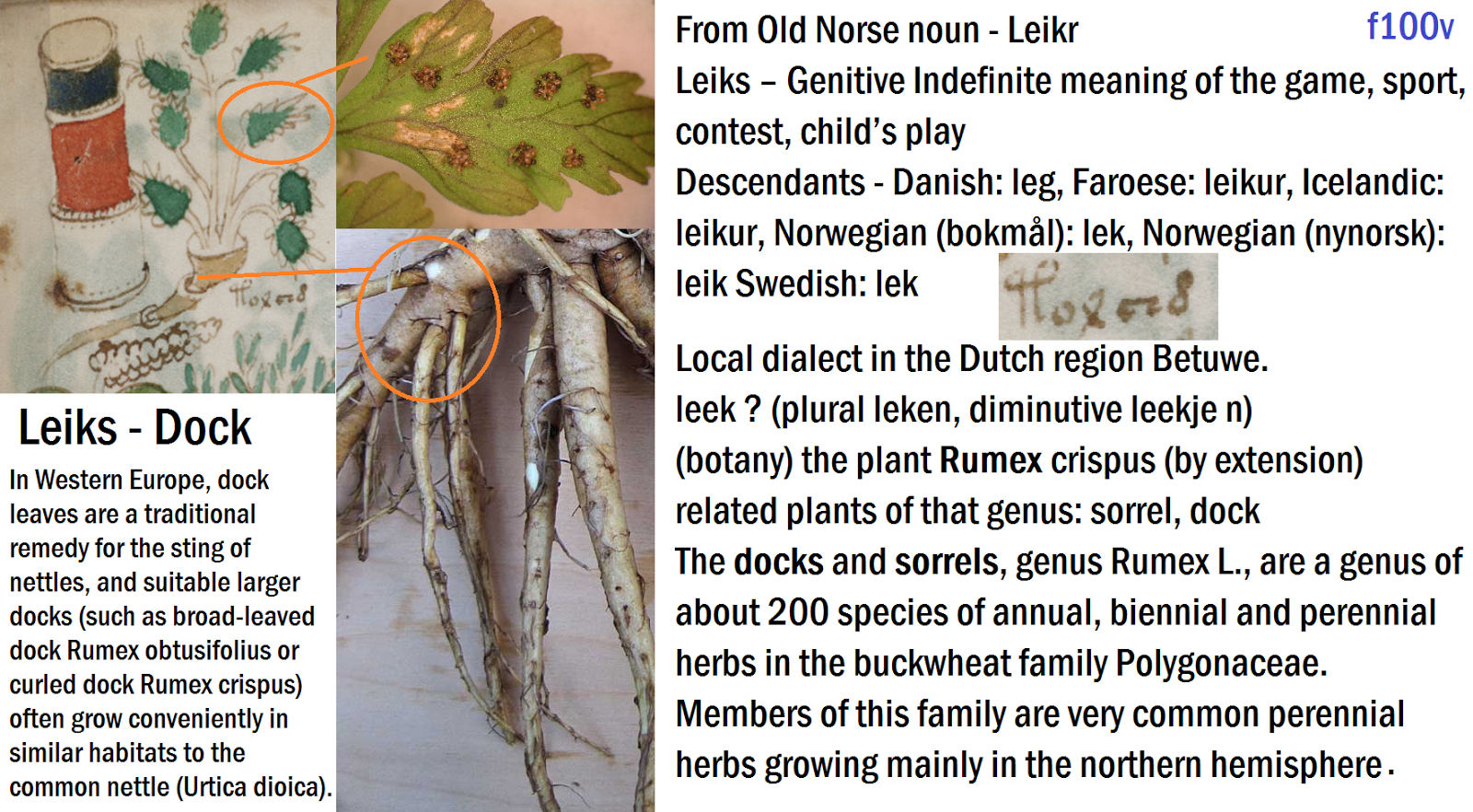 Despite the harsh Nordic climatic conditions, a great number of medicinal and culinary herbs have been used since early in Finland's history. The first-used plants originated from the Finnish flora, but later the plant spectrum was enlarged by non-domestic species. The introduction of new herb species was influenced by several historical factors, such as medieval monastery culture or the Swedish governmental policy favouring the domestic cultivation of herbs during the 18th century (Peldan 1967). In military fortresses, herb gardens supplied the necessary healing plant materials for the surgeons, and in towns a herb garden of about 100 m2 was the precondition for the permission for a new pharmacy. The available historical sources report different number of species used as medicinal and spice plants in Finland. In the earliest plant list, from the Naantali Monastery near Turku (South West Finland), medicinal use of 21 plant species was reported in 1440 (Peldan 1967). Elias Tillandz in 1673 listed about 60 species used and cultivated around Turku for medicinal and flavouring purposes (Ruoff 2001). In the first Finnish language herb book, Pietari Gadd described the cultivation of 17 spice and medicinal plants (Gadd 1768). A literature survey by Saarnijoki (1976) listed the medicinal plants which were cultivated in the vegetable and herb gardens in Finland during the 17th to 19th centuries. The number of the most popular herb species was 24. Kalliomaki (1999) mentioned 50 herb species from the wild and from garden cultivation which were used for medicinal purposes in Finland.

From Report of a Working Group on Medicinal and Aromatic Plants, edited by E. Lipman

"...The old tradition of monasteries as healing centres continued throughout the late Middle Ages. In particular, the ancient learning of herbal tradition was preserved and transmitted in monastic manuscripts," as is exemplified in the chapter of Niiranen, in which the herbal recipes of the monastery of Naantali is analysed. Such learning was not a monopoly of monks and nuns and herbal guide books were used in lay settings as well. During the last centuries of the Middle Ages lay settings became increasingly important in the field of healing, as monasteries lost a lot of their former importance after the birth of universities. From the fourteenth century on, new types of sources such as health books and personal health guides, texts produced mainly for the upper middle class, increased in number. Guide books were composed also by the elite, as McClecry's analysis of the Portuguese king Duarte's (1433-1438) texts, Loyal Counsellor and Book of Advice, reveals. Not only living well but also dying well was in the interest of medieval people; these moral issues were also emphasised in artistic representations, as Sophie Oosterwijk argues in her chapter 'This Worlde is but a Pilgrimage': Mental Attitudes in/to the Medieval Dante Macabre.'

The structural similarity with herbals is in accordance with the assumptions made about the influence of medieval Danish herbals. Similarly to the Occitan collection, recipes concerning mental disorders are dispersed among other recipes for common ailments such as fevers, stomach and skin diseases, frost-bite, bleeding nose, dysentery, toothache, broken bones, dog bites, assorted wounds, baldness and hair loss. There are no veterinary recipes (in comparison to one in the Occitan collection) and only one how-to-do recipe (in contrast to several household chores among Occitan recipes). How to make ink with wormwood in order to prevent mice from eating hooks is the only advice on daily life offered for the Swedish audience." This tip undoubtedly refers to the world of universities or monasteries where books were frequently used. However, magic is not present in any form and no prayers or fragments of liturgical texts are cited in the Swedish collection. The Swedish text is shorter than its Occitan counterpart. There are only nine paragraphs, each concerning one main ingredient and different mixtures made from it, in seven folios, whereas the Occitan collection consists of larger volume of folios with more than 300 individual recipes. The identification of all the recipes that concern mental disorders is not easy."

The leaves, picked in June and July when they are in best condition and dried. They have also been used in the fresh state. Chestnut leaves have no odour, but an astringent taste.

In some places Chestnut leaves are used as a popular remedy in fever and ague, for their tonic and astringent properties.

Their reputation rests, however, upon their efficacy in paroxysmal and convulsive coughs, such as whooping-cough, and in other irritable and excitable conditions of the respiratory organs.

Culpepper says:
'if you dry the chestnut, both the barks being taken away, beat them into powder and make the powder up into an electuary with honey, it is a first-rate remedy for cough and spitting of blood.

Posted by Claudette Cohen at 11:34 PM