A Page of the Voynich Translated: #f5v

During spring when sunlight (Phes/Hulda's bright phase) heats the fallow ground at the time when life wakes to migrate, the hoofed animals moving from the south, the moon low or new, then walk south by the singing Ukelei river--make a joyful sound and walk southward.

The above is a translation of the page shown below. It would be interesting to discover whether a certain Rumex does bloom along the river Ukleja during the spring months or whether the waters of the river are known to make a sound either from ice break-up or snow melting off the mountains and swelling the river, causing rapids.

These lines bring to mind what nearly every middle-schooler learns by heart: Chaucer's Prologue to the Canterbury Tales, which may have been a literary convention of the day, that is, to say picturesquely that when spring arrives it's time to move south on a pilgrimage.(1)

Several aspects about the Voynich made arriving at this transcription and translation a challenge. 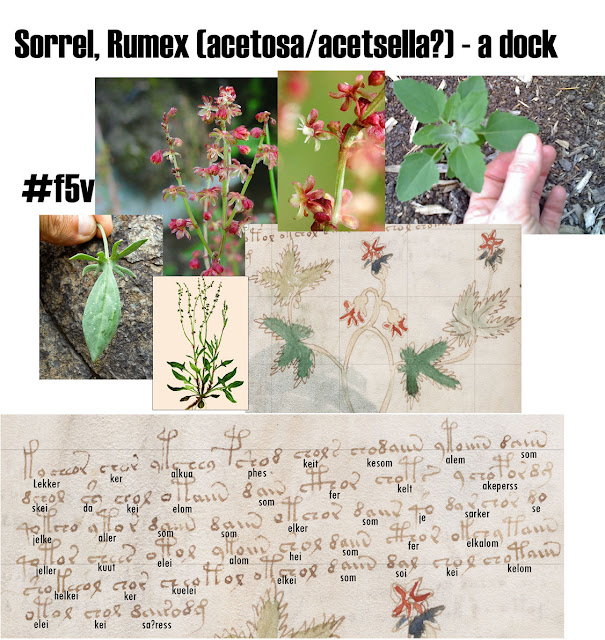 Interestingly, three geographical sites mentioned in this blog as being included in the Voynich manuscript form an almost straight vertical line from Torups in Sweden through Ukleja (mentioned here) down to Prague with surrounding castles that resemble those in the Voynich. This all ties into the discussion in the Language Candidates post about the likelihood of the Voynich being about a pre-Christian pilgrimage. 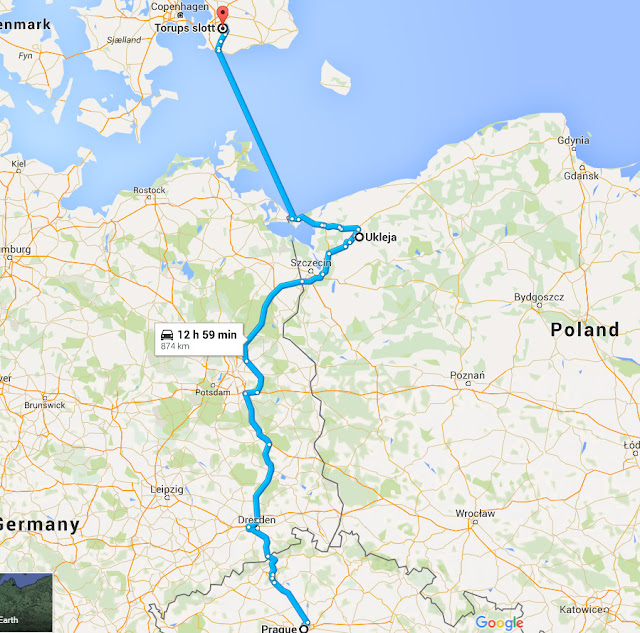 Below is a table showing a breakdown of how I arrived at this translation. You can find a more comprehensive list of words translated from the Voynich manuscript here: Voynich Lexicon.

See Voynich Lexicon for a more comprehensive list of transliterations.

(1)1 Whan that Aprill with his shoures soote
When April with its sweet-smelling showers
2 The droghte of March hath perced to the roote,
Has pierced the drought of March to the root,
3 And bathed every veyne in swich licour
And bathed every vein (of the plants) in such liquid
4 Of which vertu engendred is the flour;
By the power of which the flower is created;
5 Whan Zephirus eek with his sweete breeth
When the West Wind also with its sweet breath,
6 Inspired hath in every holt and heeth
In every holt and heath, has breathed life into
7 The tendre croppes, and the yonge sonne
The tender crops, and the young sun
8 Hath in the Ram his half cours yronne,
Has run its half course in Aries,
9 And smale foweles maken melodye,
And small fowls make melody,
10 That slepen al the nyght with open ye
Those that sleep all the night with open eyes
11 (So priketh hem Nature in hir corages),
(So Nature incites them in their hearts),
12 Thanne longen folk to goon on pilgrimages,
Then folk long to go on pilgrimages,
13 And palmeres for to seken straunge strondes,
And professional pilgrims (long) to seek foreign shores,
14 To ferne halwes, kowthe in sondry londes;
To (go to) distant shrines, known in various lands;
15 And specially from every shires ende
And specially from every shire's end
16 Of Engelond to Caunterbury they wende,
Of England to Canterbury they travel, 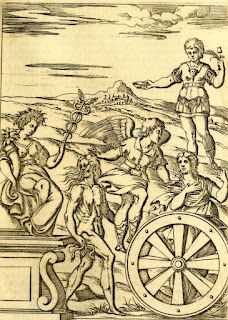 (2) The quote below is from Le immagini de i dei antichi (Images of the Ancient Gods) by Vincenzo Cartari. This book was an immense success, it went through numerous editions and was translated into many languages, including English in 1599. It became the iconographic handbook of painters throughout Europe for the next 250 years. The woodcuts are based on those of Bolognino Zalteri printed in the Venice 1571 edition with some revision for modesty's sake. Catari's book on the images of ancient gods was first published by Francesco Marolini in 1556, and the first illustrated edition followed in 1571. His work on the gods and their symbols is a key work in the history of symbolism in the Renaissance and the manual for artists as to the proper attributes of the deities. [See Seznec's The Survival of the Pagan Gods for a full discussion of the importance of this text.] According to Seznec, Cartari (b. ca. 1500) was probably a protégé of the duke of Ferrara. In his work Imagini colla sposizione degli dei degli antichi ("Images depicting the gods of the ancients") of 1556, he identifies Lilio Gregorio Diraldi's De deis gentium varia et multiplex historia of 1548 as one of his sources. Despite the success of De deis, Cartari's work competed with it by going for a populist approach, with woodcuts of the ancient gods by Bolognino Zaltieri. Cartari focused on the gods' iconography and explained their clothing, expressions, poses and attributes. Cartari's work was an influence on that of Gian Paolo Lomazzo. Unlike the treatises of the other Italian mythographers (Bocaccio, Conti, Giraldi), Cartari's work was profusely illustrated with captioned images of the pagan gods, and composed in the Italian vernacular. The systematic integration of text and image constituted an original approach to the classical myths, and the use of the vernacular made the text accessible to learned and unlearned alike. Cartari's iconographical, symbolic interpretation of the images of the pagan gods as they were represented in antiquity and discussed by Renaissance antiquarians proved to be an enormously popular approach to pagan myth. His 'Images' was well known to Renaissance artists, poets and critics - "an extremely useful work for historians, poets, painters, sculptors and professors of polite literature."


And as they perceived in her sundry natures, and divers properties, so they ascribed unto her divers and several names, and erected Statues and Altars unto her, according to those names, under which they then so worshiped and adored her, who (as I have already written) was with many taken and understood for Juno: and those flatus and images which were dedicated unto her, were made also many times of many other goddesses: whose properties signified them to be in nature the same as the earth, as first Lagran Madre, la Madre de i dei, Ope (Ops), Phes, Cibelle, Vesta, Ceres, Proserpina, and many others* which of their places and habitations where they then remained, had their names accordingly, all signifying one & the same thing, being as I have said, the Earth, for which indeed, & from whose fruits, all things here in the world seem to receive their life and being, and are nourished & conserved by these fertileness thereof, and in this respect she was called the mother of the gods, insomuch, as all those gods of the Ancients, which were so superstitiously adored and held in that respective regardance, lived here once on the earth, and were fed and maintained by the increases, fruits, & suppeditaments thereof. 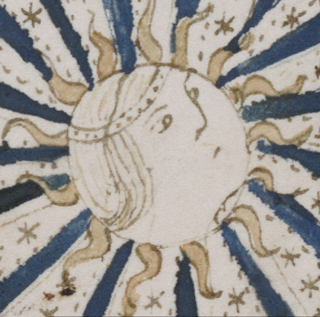 I extracted the passage above from Steve Nichols' TARO of the FOUR WORLDS, p139 (ISBN 1874603073), which is a collection of these images along with explanatory quotes from that era. This quote in particular lists known names for an ancient sky deity, a woman in front and tree in back, that indeed was tied to the fruitfulness of the earth but had as much to do with the sun as she did with the earth. At base, she is a personification of sunlight, as the title Phes would suggest (Phes - From Proto-Indo-European *bʰehos (compare φάω ‎(pháō), φαίνω ‎(phaínō)). Cognates include Latin iubar ‎(“radiance, light”), Sanskrit ‎(bhās, “light, brilliance”), ‎(bhāsa, “luster, light”), and Old English basu ‎(“purple”)) and is related to the sky deity discussed by Pavel Limerov in FOREST MYTHS: A BRIEF OVERVIEW OF IDEOLOGIES BEFORE ST. STEFAN:

In other words, for the peoples of North-Eurasia, the mythological fertility does not have an earthly origin, but descends from the heavenly spheres. In the Finno-Ugric mythology, it is represented by the motif of the descent of heavenly goddesses or animals to the earthly world. Such is the Finnish world maiden Ilmatar, who entered to the waters of primordial ocean to give birth to the future creator of world Väinämöinen; such is the Ob-Ugrian Kaltash, the giver of life, who was pushed down from the sky by Torum and gave birth to Mir-Susne-Hum in the air, between heaven and earth (among the Karelians Kaltas-san-taaram – Kaltas is the heavenly mother, quoted in Ignatov 2004: 101); such is the Mordvin Ange-Patjaj, who resides in heaven and gives life on the ground. The myth about a heavenly maiden is known in the mythology of the Sami, Estonians, Mari, Komi-Permyaks, where the idea of fertility is probably less pronounced. As to North Siberia, there are a number of goddesses – the Old Women of Life, who reside in the heavenly world somewhere in the south: the Selkup Yljunda Kotta, the Nganasan Ninulemy Mou njamy, the Ket Tomam, and the Evenk Bugady Enityn. All these divine characters give fertility of earth but reside in heaven. Next to the mentioned female deities, there are also others, including the Earth Mother, but the functions of all of them are secondary.

And in Anssi Alhonen's Notes on the Finnish Tradition:


The upper world is located in the skies and also to the south. The great birch tree (or in Finnish tradition, the giant oak) grows there. At the roots of the tree, a spring flows and marks the source of the world river. Near the tree and spring there is a warm lake, or 'sea of life', where water birds and human souls are renewed. In the Finnish folk religion this upper world became a warm and light world located in the south called Lintukoto (or 'home of the birds') and the sea of life became a body of warm water surrounding the Lintukoto. This upper world is ruled by an old woman, the ruler of all life, protector of childbirth, motherhood and water birds. She is the sender of souls and the mother of the gods. In Finnish mythology a mysterious virgin by the name of Iro is said to have given birth to the three divine brothers at the beginning of times. In Finnish folk religion, the divine mother is the Virgin Mary (or 'Maaria' in Finnish) and she is remembered in songs and spells as a spiritual mother, healer, helper and protector of motherhood. 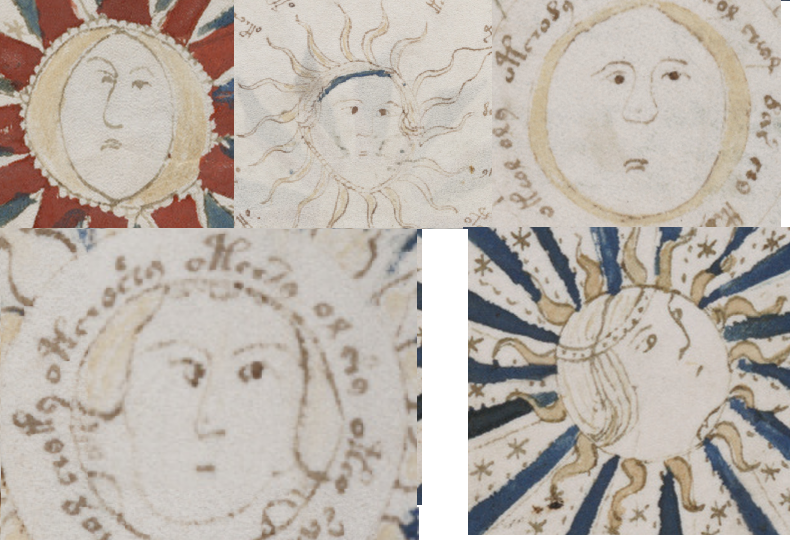 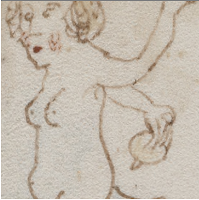 This sky deity of agriculture and women's craft embodied light, darkness, and death and was responsible for the seasons. She was often referred to in complimentary titles such as The Shining One, as often happens in for example Homeric verse, and these could easily be mistaken by outside cultures as the deity's given name. More about this deity can be found in The Rites of Hulda. Her main celebration occurred at the intercalary transition between the old and new year around mid-November. More about the seasons and the calendar can be found here in The Calendar and Seasonal Year.

Posted by Claudette Cohen at 12:49 AM