This post is about some of the things the women depicted in the Voynich manuscript are holding--their purpose and significance--in addition to the drop spindle and distaff that are representative of Hulda and in addition to the bucket and birch so requisite to the sauna/banya. 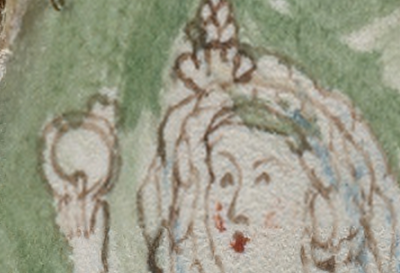 The best guess I can make on these rings,which are of course too big to be fnger rings or fibulas, is that they are some sort of torc used ceremonially or ritually somehow. There are quite a few of them throughout the manuscript. I suppose it might also be a torc-like annular brooch or bracelet, but the shape suggests a muffed torc. Torcs have been found in the UK and throughout the continent, some prominent ones being unearthed in France and northern Austria. It has been speculated that they served a more ceremonial purpose such as what appears to be going on below. You will see that some of these items bear a resemblance to artifacts in the Permian Animal Style. An issue in the Estonian Folklore journal is dedicated to this style.

These torcs may have had beads inside them and been used as rattles to mimic/invoke thunder. Here is the Wiki on the torcs: 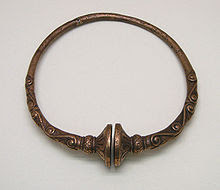 Other possible functions that have been proposed for torcs include use as rattles in rituals or otherwise, as some have stones or metal pieces inside them, and representations of figures thought to be deities carrying torcs in their hand may depict this. Some are too heavy to wear for long, and may have been made to place on cult statues. 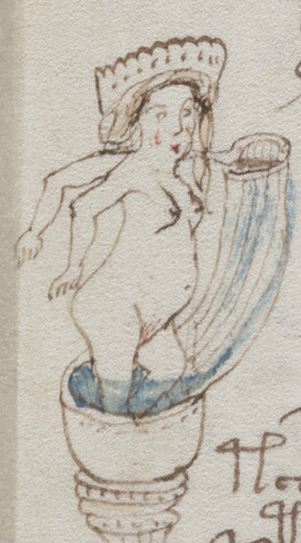 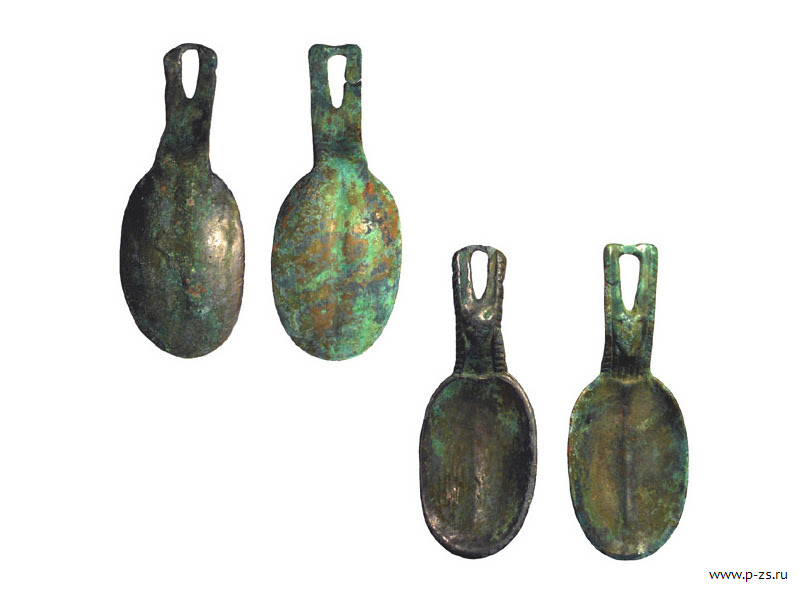 Below is a blurb on the ceremonial significance of spoons (the English is a little broken).

Religious spoons - attributes holidays tools rites. Spoon to mix it was impossible, they were cast images of spirits. More than just survived spoons bear with a muzzle, which "fed" forest guest - bear head on the bear festival. Preserved Permian spoon depicting ostrogolovoy guises - the main spirit of the underworld. He also brought gifts and fed sacrificial food, in the hope that the troubles and disease bypass house donor side. On religious spoons wondered thrice throwing up. If the spoon fell head up - the answer was positive spirits.

Leszek Gardela includes photographs of such staffs in her paper titled A Biography of Seidr Staffs: Towards an Archaeology of Emotions.

This is a bird-headed scourge handle found at Sofporog. 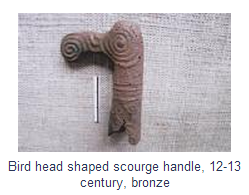 That's no cane, below left. She's holding it in the middle, like this witch depicted in 1643. 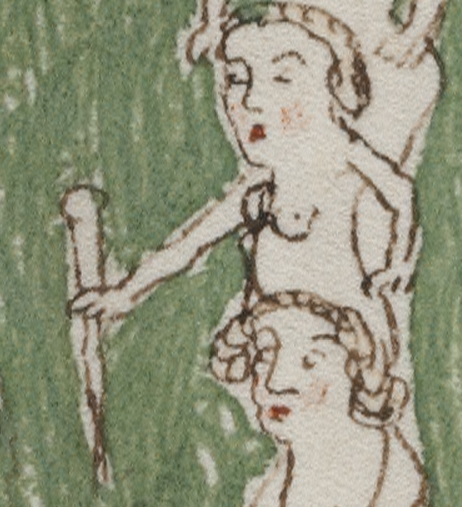 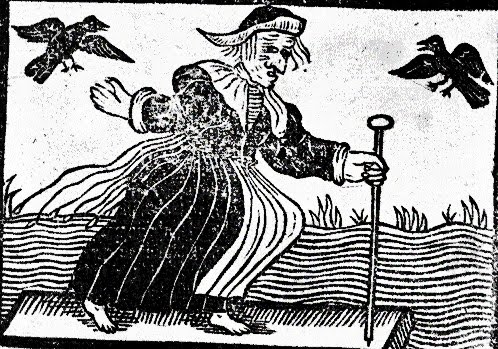 And this one with a clear subliminal message to never trust a woman with a staff. 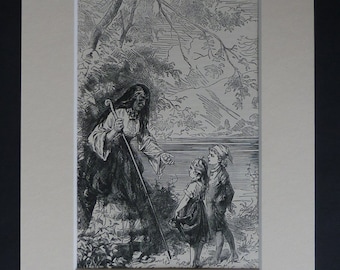 I'd guess her family was in fact Christian and that this is not the earlier use of the cross as a fertility symbol. It is one of the very few allusions to Christianity in the manuscript. 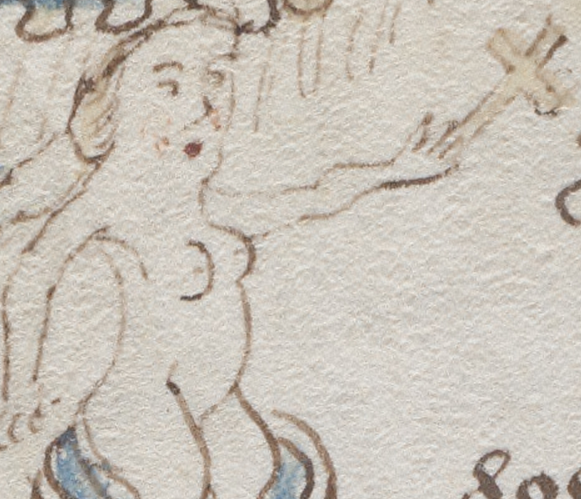 What is a cross-holding and hence it may be assumed Christian woman doing participating in what is otherwise a wholly heathen ritual? Is that possible?

I think so, for two reasons.

First, throughout Europe as early as the 14th century what were later deemed "heretical" sects abounded, and some of them took biblical texts to interesting extremes. Such is the case with the Adamites in Bohemia discussed in the post about Chynov cave. It's entirely possible an Adamite could have joined these festivities and enjoyed them to the fullest.

Second, for centuries the old religion lived side-by-side with the Church, in many areas co-existing peacefully. This is especially true in the Baltic and northern states of Europe.

It is good to keep in mind that


in the rural countryside of Karelia, the local form of Orthodox faith remained somewhat primitive, incorporating many features of older religious praxis. Literacy among the Orthodox population was low. In 1900 it was estimated that of all persons over the age of 15 in East Finland, 32 percent were illiterate. The Orthodox population knew very little of their faith except the outer forms. The priests were generally Russians who seldom knew Finnish. As Karelia and its arable land was poor, it did not attract first class priests. The language of the services was Church Slavonic, a form of old Bulgarian. A Russian could understand some parts of the services, a Finnish-speaking person nothing. Finnish Orthodox Church

The Balts are exceptional among Indo-European groups in that they have maintained their language, folklore, pagan beliefs and customs in a remarkably pure state for so long. A deliberate effort to convert the native population to Christianity was begun only after Grand Prince Jogaila accepted baptism in 1386, together with the royal crown of Poland. But for a long time the new religions retained only a superficial hold on the population, which remained "stubbornly pagan" in some regions even to this century. To put it simply – the Balts were the last pagans of Europe. For more see Romuva.

To blow = to heal

The woman inside the sun below right looks like she is blowing out air. To the left of her is a scene from the movie "The Cuckoo." In it, the Sami widow Anni blows on near-death Finnish Soldier Veiko to turn him back to the land of the living.

Below is Veiko's soul being beckoned toward the land of the dead. 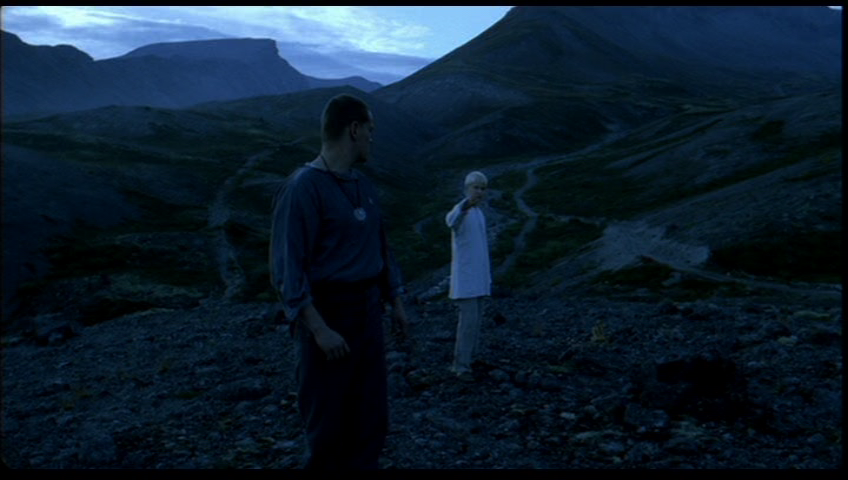 Below is an excerpt from Vladimir Napolskikh's "Seven Votyak Charms" from Estonian Folklore.

The common Votyak word for the healer (or witch-doctor) is emjas'kis' "healer" - a participle (= nomen agentis) from emjany; "to heal" - or pel'l'as'kis' "blower" - a participle from pel'l'as'kyny "to blow"; the last word describes one of the main ways of magic treatment, well-known throughover all the Europe, when the healer blows upon the water with charming and gives it to the patient to drink.

Posted by Claudette Cohen at 5:01 PM