Between the Devil and the Deep Blue Sea: The Latency and Mutations of Christianization in Various Regions of Northern Europe

Women in the Baltic region in the late middle ages might be seen as thralled in a catch-22. If they tried to live freely, practicing their rites under no institutionalized guard, they could easily fall prey to the booming slave trade of the times, when word had gotten out that there was a great demand for blond girls in other parts of the world as far away as the Middle East. Trade in blond girls during this time proved very lucrative. 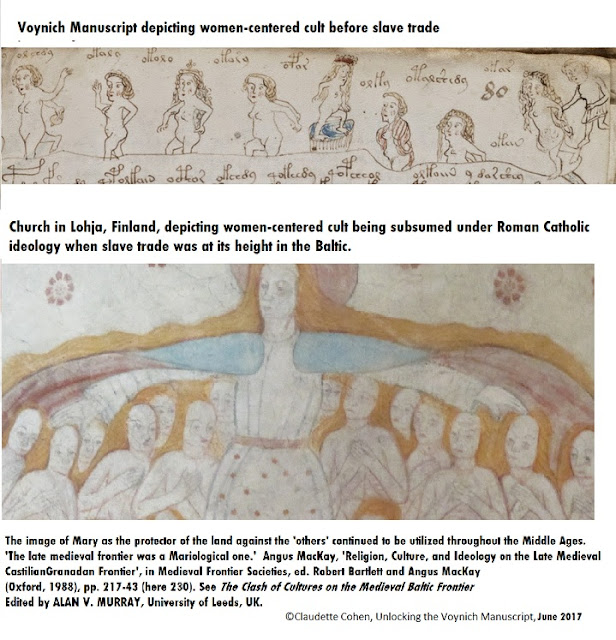 The choices for protection weren't many: from the East, the Eastern Orthodox Church; from the West, the Roman Catholic Church often administered under the auspices of the Hanseatic League; from the South limited protection once came from such tribes as the Kumon, who practised shamanism/Tengrism, but even these were branching out and forming alliances with Christianized states; or these women could try their luck hiding out in caves and relying on their own canniness and extensive reputation as sorceresses. The pressures to conform and seek protection must have been intense when many parts in Europe were staging witch hunts in the latter part of the 15th century. By then the Hanseatic League was losing its power. 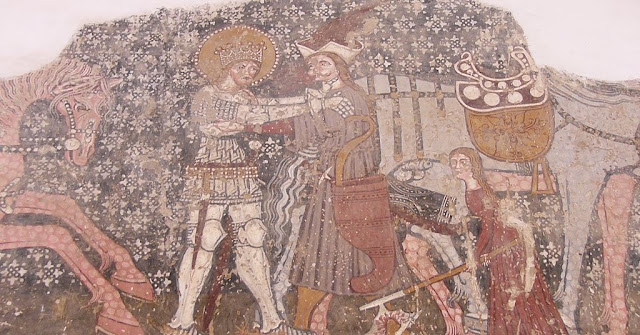 Above: Hungarian King Ladislaus I of Hungary (left) fighting a Cuman warrior (right), from the Székelyderzs (Dârjiu) Unitarian Church, Romania. Most info centers around the two men fighting with identification of the woman holding the halberd with a star as simply a girl. She could be a reference to protection from the slave trade or protection of an old women-centered belief system, i.e., paganism.

What often happened was that the woman-centered part of belief systems were subsumed under safer cults of the Virgin Mary, with the more pagan vestiges either dying out or becoming clandestine.

Proof of a Booming Slave Demand for Finns

Finns were especially valuable on the slave trade market because they were neither Christian or Muslim, and because of their light skin colour. Korpela explains:


The most expensive slave on the Caffa register was a 14–year-old white boy referred to in the source text as “Jarcaxius” (“Circassian”?), who was sold for 750 aspers, and there were other slaves with good colour qualifications that seemed to carry an above-average price. One four-and-a-half-year-old Rus’ian “white” boy cost 185 aspers, although such young children were usually very cheap on account of their high mortality rate. “White” Saracen slaves were also overpriced in the Genoese registers, and blond boys and girls were expensive on the Italian markets, too.

The slave trade in Eastern Europe gradually faded, as the control exercised by the emerging structure of European states became stronger. The spreading of Christianity also caused a decline in slave trade during the medieval period. Slave trade within Europe declined already in the early medieval period, but in regions bordering on Islamic countries, slave trade continued up until the pre-modern period. Source: Why did Medieval Slave Traders go to Finland? APRIL 17, 2014 BY MEDIEVALISTS.NET


Estonia a last stronghold against Christianization

Estonia has the distinction of being a nation where Christianity was held at bay the longest. For example, in 1261, warfare continued as the Oeselians (Estonians inhabiting the island Saaremaa) had once again renounced Christianity and killed all the Germans on the island. A peace treaty was signed after the united forces of the Livonian Order, the Bishopric of Ösel-Wiek, the forces of Danish Estonia including mainland Estonians and Latvians defeated the Oeselians by conquering the Kaarma stronghold. Soon thereafter, the Livonian Order established a stone fort at Pöide.

Saints’ cults played a crucial role in medieval society. Although we know very little about the beliefs and rituals of the indigenous peoples of Livonia, either before or after the thirteenth-century conquest, we may assume that the process of Christianization must have caused major changes in their religious practices. How quickly these changes took place, and how deep they were, is a question which is difficult to answer, given the scarcity of sources describing the attitudes of the indigenous peoples towards the Christian faith, or dealing with their religious customs. This is valid not only for the thirteenth century but also for the rest of the medieval period. There exist, of course, brief complaints in documents such as church statutes about the ignorance and superstition of the ‘non-Germans’, but these texts were written by and from the point of view of the ruling elites and not that of non-Germans themselves, who did not possess a written culture before the nineteenth century. One may also assume that complaints about such matters were a commonplace in other newly Christianized countries as well. Source: Saints’ Cults in Medieval Livonia, AUGUST 3, 2014 BY SANDRA ALVAREZ

The old tradition of monasteries as healing centres continued throughout the late Middle Ages. In particular, the ancient learning of herbal tradition was preserved and transmitted in monastic manuscripts," as is exemplified in the chapter of Niiranen, in which the herbal recipes of the monastery of Naantali is analysed. Such learning was not a monopoly of monks and nuns and herbal guide books were used in lay settings as well. During the last centuries of the Middle Ages lay settings became increasingly important in the field of healing, as monasteries lost a lot of their former importance after the birth of universities. From the fourteenth century on, new types of sources such as health books and personal health guides, texts produced mainly for the upper middle class, increased in number. Guide books were composed also by the elite, as McClecry's analysis of the Portuguese king Duarte's (1433-1438) texts, Loyal Counsellor and Book of Advice, reveals. Not only living well but also dying well was in the interest of medieval people; these moral issues were also emphasised in artistic representations, as Sophie Oosterwijk argues in her chapter "This Worlde is but a Pilgrimage': Mental Attitudes in/to the Medieval Dante Macabre."

Curiously, despite common beliefs regarding the maladies and generally recommended therapeutic measures, there are not many similarities at the individual recipe level between the five recipe collections, for example the systematic use of a certain plant for a certain ailment. This is due to the fact that medieval materia medica is a very broad tradition, embracing various cultural layers and apparently plenty of regional or even local knowledge. Based on this limited survey, it seems that Hildegard's Physica contains the most divergent sources, probably local in origin and perhaps founded on her personal empirical experience. One suggestion is that she received support from persons who visited her monastery. One such individual was the Swedish Bishop Siward from Uppsala, whose impressive library may have enhanced her medical knowledge. In spite of this possible Swedish-German network, it is hard to see any closer ties between Physica and the Naantali monastery book, though for a more definitive view this topic would require further investigation. Many monasteries did produce and copy various texts, but they could also receive and heal patients in hospices and infirmaries. Medical knowledge was also needed by cloister inhabitants for their own use, especially when physicians were not available, as was the situation in Naantali. The first university-educated doctors apparently did not come to Finland until after the Catholic Era in the sixteenth century. In addition to monasteries and physicians, who increasingly took over the responsibility for curing and healing from monks and priests after the emergence of universities, other professionals, such as apothecaries, appeared on the medical market. All these groups of professional, semi-, quasi- or even unprofessional healers participated in practising, teaching and conserving the art of healing by copying, writing and compiling medicinal texts. To sum up, medieval recipe books from both the South and the North show that when institutional care was limited, recipes provided information, therapies and prevention for men and women regardless of their social group and in the most intimate areas of life too, such as sexuality.
Source: Infirmity in Antiquity and the Middle Ages: Social and Cultural Approaches by Christian Krötzl, Katariina Mustakallio, pages 239-240

The Latency of Orthodox Christianity to Russia and outlying lands


In the following passage, an Orthodox missionary, apparently based on Archbishop Nil of Irkutsk (1799-1874), is bemoaning the laxity of nineteenth-century Siberian converts in a tale by Nikolai Leskov:


In fact some of the baptized went back to their former belief — in lamaism or shamanism; while others made out of all these beliefs the most strange and absurd mixture: ... Double-belief was maintained not only among the nomads, but almost everywhere among my flock .. .


Posted by Claudette Cohen at 3:10 AM