The oldest known saunas in Finland were made from pits dug in a slope in the ground and primarily used as dwellings in winter. The sauna featured a fireplace where stones were heated to a high temperature. Water was thrown on the hot stones to produce steam and to give a sensation of increased heat. This would raise the apparent temperature so high that people could take off their clothes. The first Finnish saunas are what nowadays are called savusaunas, or smoke saunas. These differed from present-day saunas in that they were heated by heating a pile of rocks called kiuas by burning large amounts of wood about 6 to 8 hours, and then letting the smoke out before enjoying the löyly, or sauna heat. A properly heated "savusauna" gives heat up to 12 hours. Although the culture of sauna nowadays is more or less related to Finnish culture, the evolution of sauna happened around the same time both in Finland and the Baltic countries sharing the same meaning and importance of sauna in daily life, shared still to this day.

Sauna/Banya is utterly central to understanding the Voynich manuscript and the culture that engendered it. 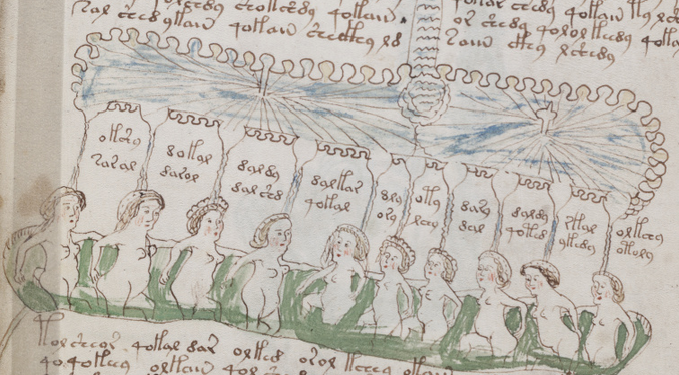 The picture above shows women in what appears to be either a sauna or a hot spring. 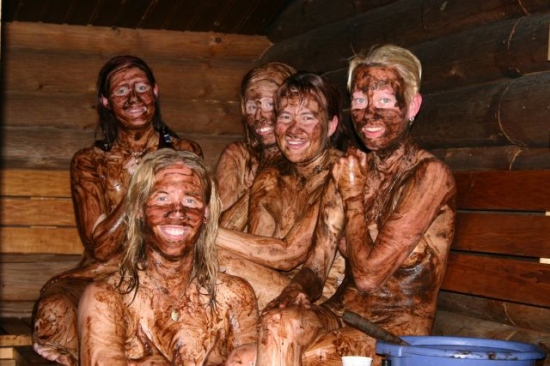 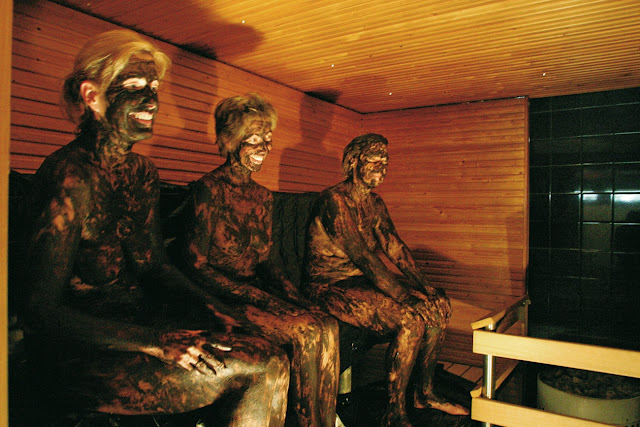 Other countries as well know and enjoy the benefits of hot spring water, for example, the Czech Republic.
But consider what Klaus Magnus wrote in the 1500s:

Nowhere on earth is the use of the bath so necessary, as it is in the Northern lands. There you find both private and public baths extremely well equipped. Private baths belong to highly placed persons and are built in the vicinity of fresh running water and beautiful gardens and herbs. Public baths are built in towns and villages and in such a large quantity as the number of people living there make necessary. It is not as Poggio claims in a letter to Leonardo Aretino: that naked people of both sexes meet with inappropriate notions. He probably means the people in northern Germany, especially near the Baden area, who are rather loose with their morals. Among these people there are some who are so loose and degenerate in the hot baths that they even drink and sleep and allow themselves all kinds of evil and other foolishness in the baths. If such immodest creatures were found with their customs in Nordic bathing places, they would immediately be carried out and thrown into the deep winter snow drifts with the risk of being smothered. In the summer they would be thrown in ice cold water and left some time without food.

Some people firmly believe that the primary purpose of the sauna was to warm up the body. A bath would prevent colds, soften up tense muscles and alleviate any pain, exhaustion or depression. At the earliest stages water was used sparingly; the skin was supposed to become clean through perspiration.

Gradually, though, the sauna’s function as a place where the body was thoroughly cleaned by washing and flushing became important.

The basic sauna ritual is the same as it always was: warming up, sweating, taking löyly vapour and whisking, washing and cooling off. Cooling off nowadays often includes swimming. Many people like to cool off in the open air, and there are also brave ones who want to roll in the snow or take a dip in the sea or lake through a hole in the ice.

A sauna bath without a birch whisk is like food without salt as the saying goes. The bather uses the whisk to beat himself lightly; this raises the blood circulation in the skin, speeds up perspiration and produces a pleasant aroma in the hot room. The whisk is normally made of young birch twigs which are aromatically superior to all other trees. Out of season this birchy smell of summer can he reproduced by using dried or frozen whisks.

Sauna bathing does not only clean the body but also purifies the mind. The bather’s frame of mind after a leisurely relaxed sauna ritual could be best described as euphoric. It is like a rebirth; all unpleasant feelings fall away and you feel at peace with the whole world. This is what Finns mean by the care of the soul received in the sauna.  http://www.sauna.fi/in-english-2/finnish-sauna-culture-2/

Meanwhile back in Britain,

As Thomas Becket, the murdered Archbishop of Canterbury, was laid out for viewing in all his woolen clothes, his body cooled and the parasites began to depart. As one chronicler reports, "The vermin boiled over like water in a simmering cauldron, and the onlookers burst into alternate weeping and laughter."

It was an age when cleanliness was viewed with suspicion as a thing almost "uncanny" and, ironically, unhealthy, that is, outside of the Northern lands. 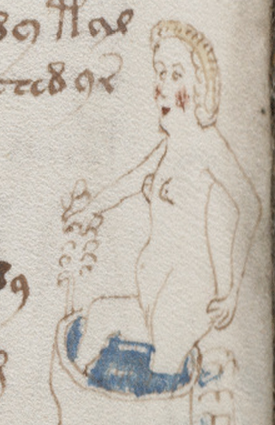 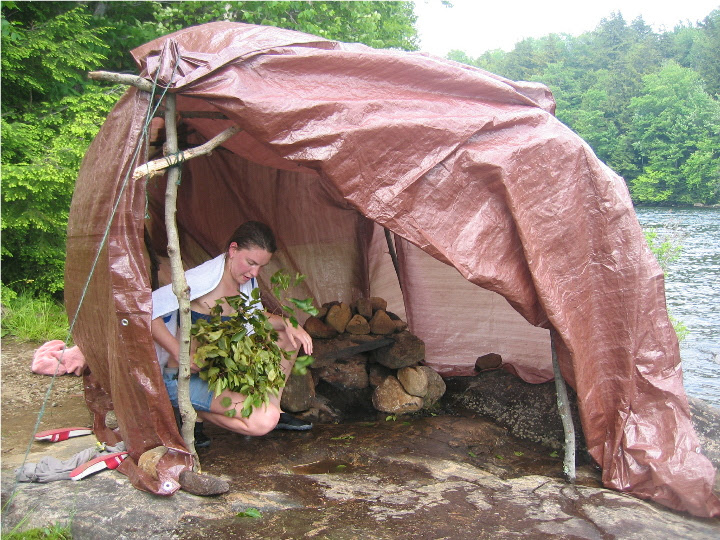 ‘Inmala’ is a tribal patron deity worshipped by the Slobodsky Udmurts and the Besermyans (the Slobodsky district, the Kirov region). No detailed description of how it looked like has remained till the present day. However, Inmala is known to be connected with heaven. The birch was the symbol of the deity. Public praying took place on a small height at the spring well, deep in the forest. On the glade there was a place for fire and a sacred birch with double top. Its trunk was wound round with sacrificed things: head scarves, pieces of cloth, braid, towels, duck’s feathers. 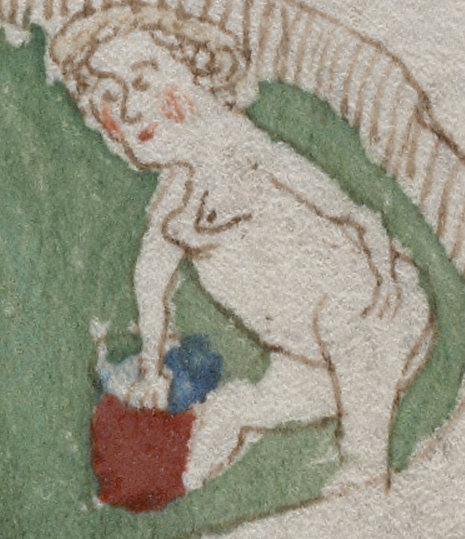 Below are depictions of typical medieval and Roman births with the squatting stool, someone behind for support, and someone in front with a bucket of water. 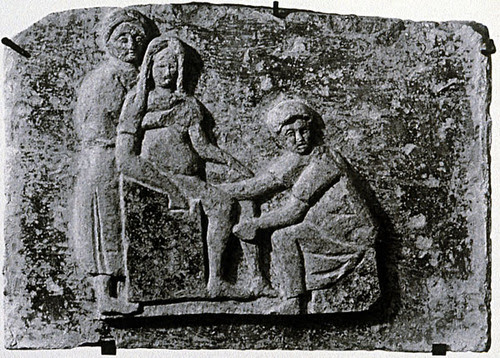 Or you might, like me, be unfortunate to be forced to lie flat on your back. This is a painful, uncomfortable way to give birth that works against gravity instead of with it. Note the massive washtub with, one might guess, the ubiquitous, proverbial hot water. 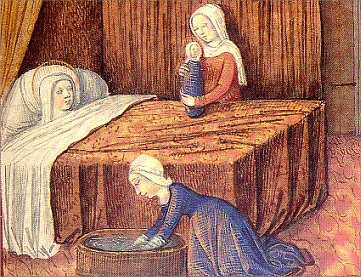 Below is an illustration from the Voynich mss. showing gravid women relaxing in the water. 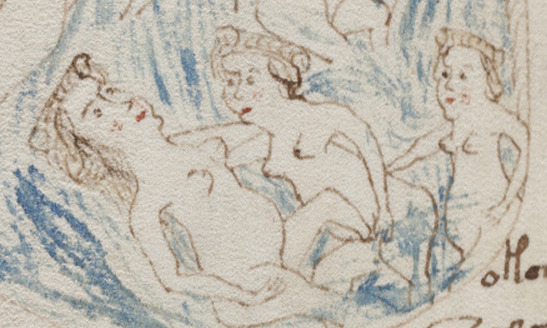 Compare this to some modern water-birthing/prenatal course scenes below.

Posted by Claudette Cohen at 4:07 AM