It's pretty fair to assume that the rosette folio in the Voynich manuscript is some type of map. After all, it shows waterways and buildings. At the same time, it has got to be one of the oddest-looking maps ever created.

This might be for two reasons. First, as was discussed elsewhere in this blog, the map's structure mimics the framework used to make certain types of lace.

Second, as a route map it may depict a journey rather than the simple static topography of a regular map. Route maps were used by pilgrims to get to their destination. Below is a typical example. 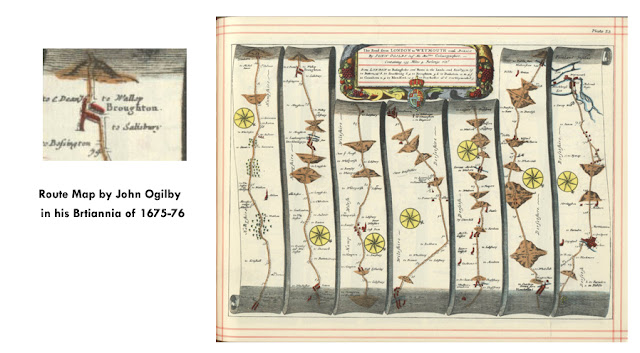 Note that in the English route map by John Ogilby above, place names are preceded by the word "to." In the route map below, centered around Rome, the word preceding place names or routes is "via." 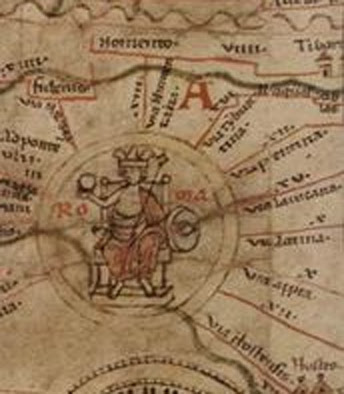 If the Voynich manuscript's rosette map is a route map, might it also have some preposition that precedes place names? 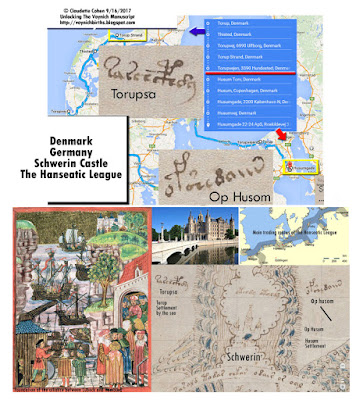 Place names can easily include prepositions, such as Stratford upon Avon. Germanic languages have in common a two-letter word often signifying to, towards, up, or on. In English, up is still used to mean "further along (in any direction)," e.g., "Go up the street until you see the sign." Similarly, in Middle Dutch, op can mean "in the direction of." Before the 1930s, Norwegian used op as well before changing the spelling to opp. Various languages combine words with prefixes indicating direction, some of them being Hungarian, Finnish of course, Dutch, German, and the Norse languages (Sweden's Uppsala).

How prevalent is op as a prefix in the rosette map?

I went through every word in the map and formulated a key by prefix, as follows: 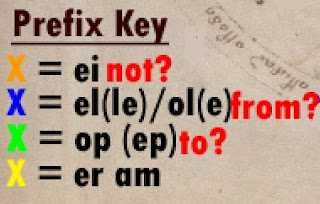 As you can see, most words begin with the following prefix:

These received a blue X. Most of them are situated on the periphery of each rosette.

In Hungarian, the verbal prefix el- indicates actions whose direction is pointing away from the speaker, either literally or figuratively. Could it be used in this instance to mean "coming from"?

Op received a green X. These tended to be closer to the centers of the rosettes.

Ei or Oi received an orange X. These could denote whole sides of rosettes, as in the example below. 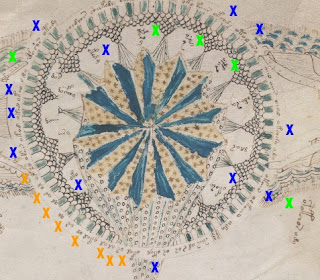 I compared this orange area to the pilgrimage map. It corresponds to a corner of the Black Sea. So I looked up what was happening historically in this region and found this:


In medieval times, the Black Sea provided a major link between Europe and the Islamic world. From the 9th to the 16th centuries, the Black and Caspian Seas bustled with trade between the two regions... The Black Sea trade routes carried European exports such as furs, amber, and slaves to Asia, while luxury goods such as silks, spices, perfumes, and jewelry moved in the opposite direction.

In the 15th century, trade through the region began to decrease as the Turkish Ottoman Empire, which controlled the Black Sea and much of the surrounding area at the time, began to restrict the traditional trade routes, and piracy became more of a problem.

Finally, the pair of words er am received a yellow X. It occurs here and there on the map.

All of that said, I still know neither a) whether the initial letter is an e, o, ø, ó, ò, ő, ö, or ô, nor b) what language Voynichese is. No one knows. I'm simply looking for patterns and resemblances.

Nevertheless, it's at least a fair guess that since so many words begin with the same patterns of letters, those may be prefixes, and since they occur on a map, these could very well be prepositional, as is the case with the two example route maps.

Separating these possible prepositions from what could be the place names may in turn flesh out meaning in the map.

Posted by Claudette Cohen at 11:00 PM