Fundamentally, the Voynich manuscript portrays the relationship between specific elements at work within a very particular belief system. Timing in the graphic below would include what season it is (where the sun is in relation to the earth and how the plants and animals are responding) and how far along a woman is in her pregnancy. These made up the heartbeat of a world that was far less metaphysical than it was ultraphysical. So, no, you won't find alchemy or classical ontology here. It is the world of the folk. 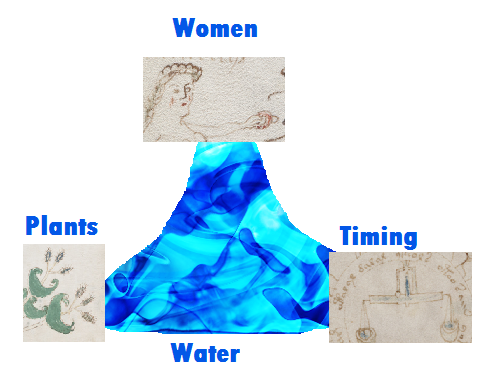 This post explores European myths and legends that associate water with women, fertility and the netherworld.

Many pools, wells or fountains are associated with the water-holda (roughly translated) throughout Germany. She haunts lakes and fountains and is seen as a fair White Lady bathing in the water and disappearing, a trait in which she resembles Nerthus. Like Nerthus, she too drives about in a wagon, sometimes requiring the help of a peasant to repair it. When he carves a new linchpin for her, she pays him with the cast-off wood chips which turn into gold if he is wise enough to take them. Young women would sometimes bathe in the icy Alpine pools in the hopes of becoming healthy fertile mothers. Germanic Mythology 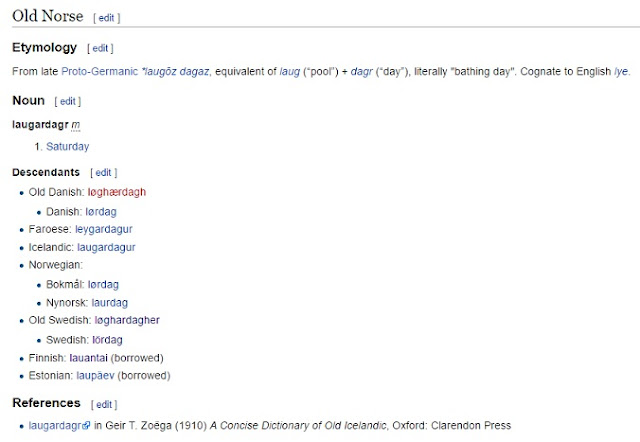 Tuhala settlement is believed to be 3,000 years old and sits on Estonia’s largest field of porous karst, where 15 underground rivers flow through a maze of caverns, audible but unseen by human inhabitants. One result is sinkholes large enough to swallow horses — the Horse’s Hole, as it is known, appeared in 1978 — and there’s also the “Mother-in-Law’s Hole”.

In the case of Tuhala Witch’s Well, water starts to spout up from the well and flood the area when excess water from the Mahtra swamp fills up the underground river and the overflowing river water seeks an escape through the well. The quantity of water flowing through the Tuhala River must be at least 5000 liters per second in order for the river to overflow. Water erupts for only a short period of time and not every year. It usually happens in late March or early April. According to local legend, the well boils over when the “witches of Tuhala” make a sauna below the ground and beat each other with birch branches, causing a commotion on the surface. This year  “the witches” got into action on 18th April…  Tuhala Witch’s Well and ancient Estonian mythology 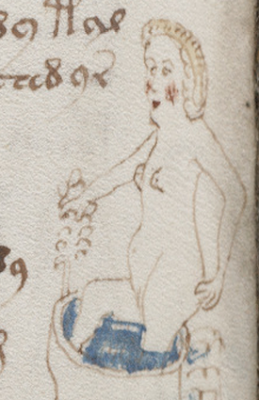 Here is an excerpt from Anssi Alhonen's Notes on the Finnish Tradition:

The upper world is located in the skies and also to the south. The great birch tree (or in Finnish tradition, the giant oak) grows there. At the roots of the tree, a spring flows and marks the source of the world river. Near the tree and spring there is a warm lake, or 'sea of life', where water birds and human souls are renewed. In the Finnish folk religion this upper world became a warm and light world located in the south called Lintukoto (or 'home of the birds') and the sea of life became a body of warm water surrounding the Lintukoto. 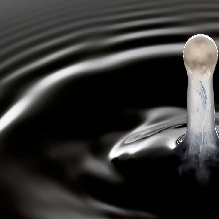 Bathing is practiced as a rain-charm in some parts of Southern and Western Russia. ...It is recorded in official documents that during a drought in 1790 the peasants of Scheroutz and Werboutz collected all the women and compelled them to bathe, in order that rain might fall.


To put an end to drought and bring down rain [in Dorpat, Russia], women and girls of the village of Ploska are wont to go naked by night to the boundaries of the village and there pour water on the ground.

In a district of Transylvania when the ground is parched with drought, some girls strip themselves naked, and, led by an older woman, who is also naked, they steal a harrow and carry it across the fields to a brook, where they set it afloat. Next they sit on the harrow and keep a tiny flame burning on each corner of it for an hour. Then they leave the harrow in the water and go home.

Wilamowice [vilamɔˈvit͡sɛ] is a village in Gmina Skoczów, Cieszyn County, Silesian Voivodeship, southern Poland. It has a population of about 460. It lies on south-western slopes of Górka Wilamowicka in Silesian Foothills, in the historical region of Cieszyn Silesia. The inhabitants of this area speak their own language, Vilamovian, which is somewhat similar to German. The people here still practice an ancient celebration called Śmigus-Dyngus (also known as lany poniedziałek, meaning "Wet Monday", Ukrainian: Поливаний понеділок). Held on Easter Monday in Poland and Ukraine, it is also observed by Polish diaspora communities, particularly among Polish Americans, who call it Dyngus Day. Similar celebrations are held in the Czech Republic and Slovakia (Oblévačka in Czech, Oblievačka in Slovak, both meaning "Watering") and in Hungary, where it is known as Vízbevető or Water Plunge Monday. Traditionally, boys throw water over girls and spank them with pussy willow branches on Easter Monday, and girls do the same to boys on Easter Tuesday. This is accompanied by a number of other rituals, such as making verse declarations and holding door-to-door processions, in some regions involving boys dressed as bears. The origins of the celebration are uncertain, but it may date to pagan times (before 1000 AD); it is described in writing as early as the 15th century and continues to be observed in Central Europe. The New Cambridge Medieval History suggests that it originated far to the west of Poland and was adopted under German influence. 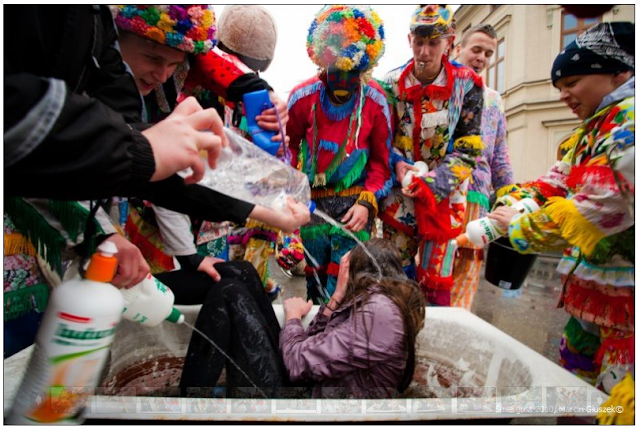 A Dyngus procession would also be held, either on Easter Monday or Tuesday. A parade of boys would take part in a march known as chodzenie po dyngusie – "going on the Dyngus" – or z kogutkiem – "with the cockerel", a reference to the use of a live bird, usually taken without permission and stuffed with grain soaked in vodka to make him crow loudly. (A decorated and carved wooden rooster was sometimes used as an alternative.) The rooster was a symbol of fertility, carried on a small two-wheeled wagon which had been painted red and decorated with ribbons and flowers, to which was often also added small puppets representing a wedding party. This would be pushed from door to door by the boys, who would crow like roosters and sing Dyngus songs conveying good wishes and requests for gifts and food. In some regional variants of po dyngusie, the boys would march through the village with one of their number dressed as a bear with a bell on his head – either wearing a real bearskin or a stand-in made of pea vines. The group would go from door to door collecting "gifts for the bear" before "drowning" the bear in a nearby stream or pond. The "bears" were often invited in as they were believed to ensure that there would be a good harvest, reflecting a very ancient belief in the power of the bear to prevent evil, encourage crop growth and cure diseases. In Mazowsze and Małopolska, boys wearing bearskins would also chase girls. (Compare with Scotland's Hogmanay).

Water and the Nether World

Aado Lintrop's On the Udmurt Water Spirit and the Formation of the Concept of 'Holy' among Permian Peoples in Estonian Folklore discusses the commonly held belief in this region that the realm of the dead is situated on the other side of water.


In Estonian mythology, Hiiela is the land and dwelling place of the dead; it is located directly beneath sacred oak groves where the dead are buried. Hiis was the Estonian popular wildlife sanctuary, which applied by means of rituals and sacrifices to higher forces' (spirits, deities, ancestors) favor. Nowadays, mainly defined by the sacred sacred grove.

And in German legend, Holda held her court within the Hörselberg, and from this mountain would

issue the Wild Hunt, with her at its head. The faithful Eckhart was said to sit at the base of the mountain warning travellers to return whence they came; he also rode ahead of the Wild Hunt warning people to seek shelter from the coming storm.

While Holda in northern Germany is described as leading a procession of the dead, her close counterpart in southern Germany, Perchta, is described as being surrounded by the souls of unborn children, or children who died before they were baptised. This points to Holda's dual role as protectress of souls both entering and leaving this world.

Finally, the poses of the women suggest typical folk dance moves that have been made during various at rituals and festivals for centuries. 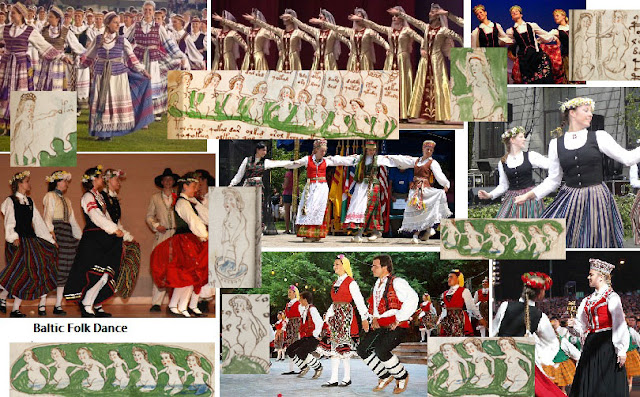 The manuscript appears to be a calendar map to use for a pilgrimage from Naissar Island, Estonia, south to a place near Prague. As such, it is a sort of communal scripture to be passed down to future generations to help define a people and secure their wholeness and prosperity.

You might think that while such ceremonies centering around water and presided over by priestesses may have once existed, nothing exists today.

Actually, a traditional ceremony in Japan has been recently revived, and indeed the myriad cultures that had made up the former Soviet Union look to the way Japan is preserving its cultural heritage as a role model for reviving their own. I'd link the video, but they took it off.

Here is more information about this ritual, called the Momosoomonomairi:

The Shuri Tonokura Community Association held a Nubi dedicatory ceremony at Shuri Castle on December 22. In this ceremony, people traditionally took water from the Heduukka River in Kunigami and the Takushi Hija River in Urasoe and presented it to the Ryukyu Kingdom’s authorities in Shuri.

On this occasion, about 40 people, including local residents in officials’ costumes, noro or female oracles and female officials, paraded from the Shuri Community Center to the castle. There, the “officials” presented the water to the Aumushirare or high-ranking female oracle and prayed for a bountiful harvest.

Seventy-five-year-old Setsuko Funakoshi, who served as the Aumushirare, said, “I prayed for next year to bring health and prosperity to the Okinawan people.”

Posted by Claudette Cohen at 3:45 PM