The Calendar and Seasonal Year 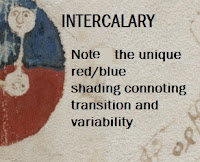 This post elaborates on the discussion begun in the post called What They Carry of how utterly central timing was in this older tradition.


A word on pre-modern calendars

Prior to the adoption of the Julian calendar in the Early Middle Ages, the early Germanic peoples used regional calendars now referred to as the Germanic calendars.

The Germanic peoples had names for the months which varied by region and dialect, which were later replaced with local adaptations of the Roman month names. Records of Old English and Old High German month names date to the 8th and 9th centuries, respectively. Old Norse month names are attested from the 13th century. Like most pre-modern calendars, the reckoning used in early Germanic culture was likely lunisolar. As an example, the Runic calendar developed in medieval Sweden is lunisolar, fixing the beginning of the year at the first full moon after winter solstice.

Thus, as in Celtic tradition, the pre-Christian year often began on 1 November, and the major division was less 12 months of roughly 30 days than the seasons.

Finland was part of Sweden until 1809 when it became the autonomous Grand Duchy of Finland within the Russian Empire due to the Finnish War. As late as 1866 Finland continued to observe the astronomical Easter.

It is good to keep in mind that in the rural countryside of Karelia, the local form of Orthodox faith remained somewhat primitive, incorporating many features of older religious praxis. Literacy among the Orthodox population was low. In 1900 it was estimated that of all persons over the age of 15 in East Finland, 32 percent were illiterate. The Orthodox population knew very little of their faith except the outer forms. The priests were generally Russians who seldom knew Finnish. As Karelia and its arable land was poor, it did not attract first class priests. The language of the services was Church Slavonic, a form of old Bulgarian. A Russian could understand some parts of the services, a Finnish-speaking person nothing. Finnish Orthodox

Below is a graphic demonstrating the variability of month names and resemblances to those found in the Voynich.

The Voynich has two main seasonal calendars, shown below. 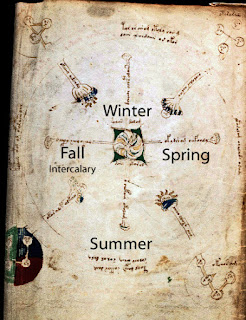 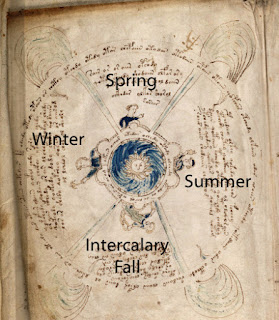 To understand a seasonal calendar, it is best to abandon the idea that a month always has a precise number of days and there are 12 of them in a year. The idea of 12 mathematically equal months was only introduced with Christianity. Nevertheless, north European cultures had divisions, albeit rough and far less rigid, that conceptually can be somewhat equated with months.

To the Celts, for example, time was circular rather than linear. This is reflected in their commencing each day, and each festival, at dusk rather than dawn. It is also reflected in their year beginning with the festival of Samhain on 31 October, when nature appears to be dying down. Tellingly, the first month of the Celtic year is Samonios, ‘Seed Fall’: in other words, from death and darkness springs life and light.

This graphic in Quire 14 depicts four people surrounding the sun.

In her paper, "Time and the Indo-European Gods in the Slavic Context," Emily Lyle associates the three Dumézilian functions (three sons) with the three seasons, priests with spring, warriors with summer and food producers with winter (1990:4,86). Then she combines the three into a four-part whole, with their mother, an overarching woman, representing an intercalary period (seen in many ancient calendars) as well as the entire year. This intercalary period in the winter is equated with Eliade’s period of eternal return when the old again is regenerated. John Weinstock, from whom that explanation was taken, says that sort of model "engages prominently in the Sami culture."

In Germany, Frau Holda's festival is in the middle of winter, the time when humans retreat indoors from the cold; it may be of significance that the Twelve Days of Christmas were originally the Zwölften ("the Twelve"), which like the same period in the Celtic calendar were an intercalary period during which the dead were thought to roam abroad. Holda seems to personify the weather that transforms the land, for when it snows, it is said that Holda is shaking out her feather pillows; fog is smoke from her fire, and thunder is heard when she reels her flax.

A man with a hat or cap holds up what could be a bottle or a cupola (top part of a building). The Warrior may also stand for simply the civic function--administrators, kings, civil servants. To his left is a photo of one of Finland's many unique bell towers. To his right is a portrait of Charlemagne holding his cathedral.

On top is a figure with what looks to be shortish hair, a lace collar, and the left hand raised as if he were lecturing. The priest's clothes are darkest and most solid. Perhaps this would be a painter's portrait. Below is an excerpt from James Frazer's The Golden Bough illuminating the connection between Spring and priest:

In various parts of Europe customs have prevailed both at spring and harvest which are clearly based on the same crude notion that the relation of the human sexes to each other can be so used as to quicken the growth of plants. For example, in the Ukraine on St. George’s Day (the twenty-third of April) the priest in his robes, attended by his acolytes, goes out to the fields of the village, where the crops are beginning to show green above the ground, and blesses them. After that the young married people lie down in couples on the sown fields and roll several times over on them, in the belief that this will promote the growth of the crops. In some parts of Russia the priest himself is rolled by women over the sprouting crop, and that without regard to the mud and holes which he may encounter in his beneficent progress. If the shepherd resists or remonstrates, his flock murmurs, “Little Father, you do not really wish us well, you do not wish us to have corn, although you do wish to live on our corn.” (XI)

And finally, a man holds up a plant. I did not find a painting of a food producer holding a plant, but I did find this fellow from the Almanach de Bergers, 1491. Note the three-leaved pattern to his left as well as the fact that this is a picture for the fall/winter, which coincides with Lyle's seasons for the Dumézilian functions. 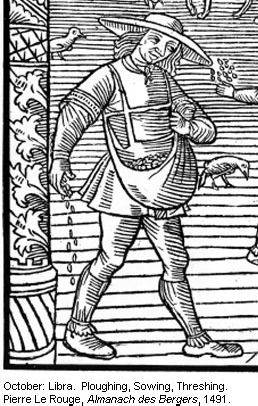 On the bottom of this Voynich mss. graphic is what looks like a woman (lower neckline, skirt, and pointy little chin) holding a chain with three links, which might signify her oversight over the other three functions or seasons, sort of the generator that turns the whole thing, taking in the old and putting out the new.


Emily Lyle associates the three Dumézilian functions (three sons) with the three seasons, priests with spring, warriors with summer and food producers with winter (1990:4,86). Then she combines the three into a four-part whole, with their mother, an overarching woman, representing an intercalary period (seen in many ancient calendars) as well as the entire year. This intercalary period in the winter is equated with Eliade’s period of eternal return when the old again is regenerated.  What Goes Around Comes Around

According to folk belief, during the intercalary period the spirits of the deceased returned to the family home. It is interesting to note that the Finnish name for the month of November is marraskuu. Marras probably comes from the Indo-European root *mer-, to die, death (compare: Latin mors, English murder, Old Norse morð etc).

When the progenitors of the Sámi – who were great hunters and who invented skis – died they were elevated to the sky and make up the constellation of Orion’s Belt.
In one of the earliest northern magical texts, a collection of spells from Merseberg, Germany, the idisi (Old High German equivalent of the Norse word, dísir, singular dís) are described as sitting together while the warriors fight, some fastening the bonds that paralyse the enemy, some holding them back, and some pulling open the bonds that the foe’s protectors have attempted to fasten on their own men. 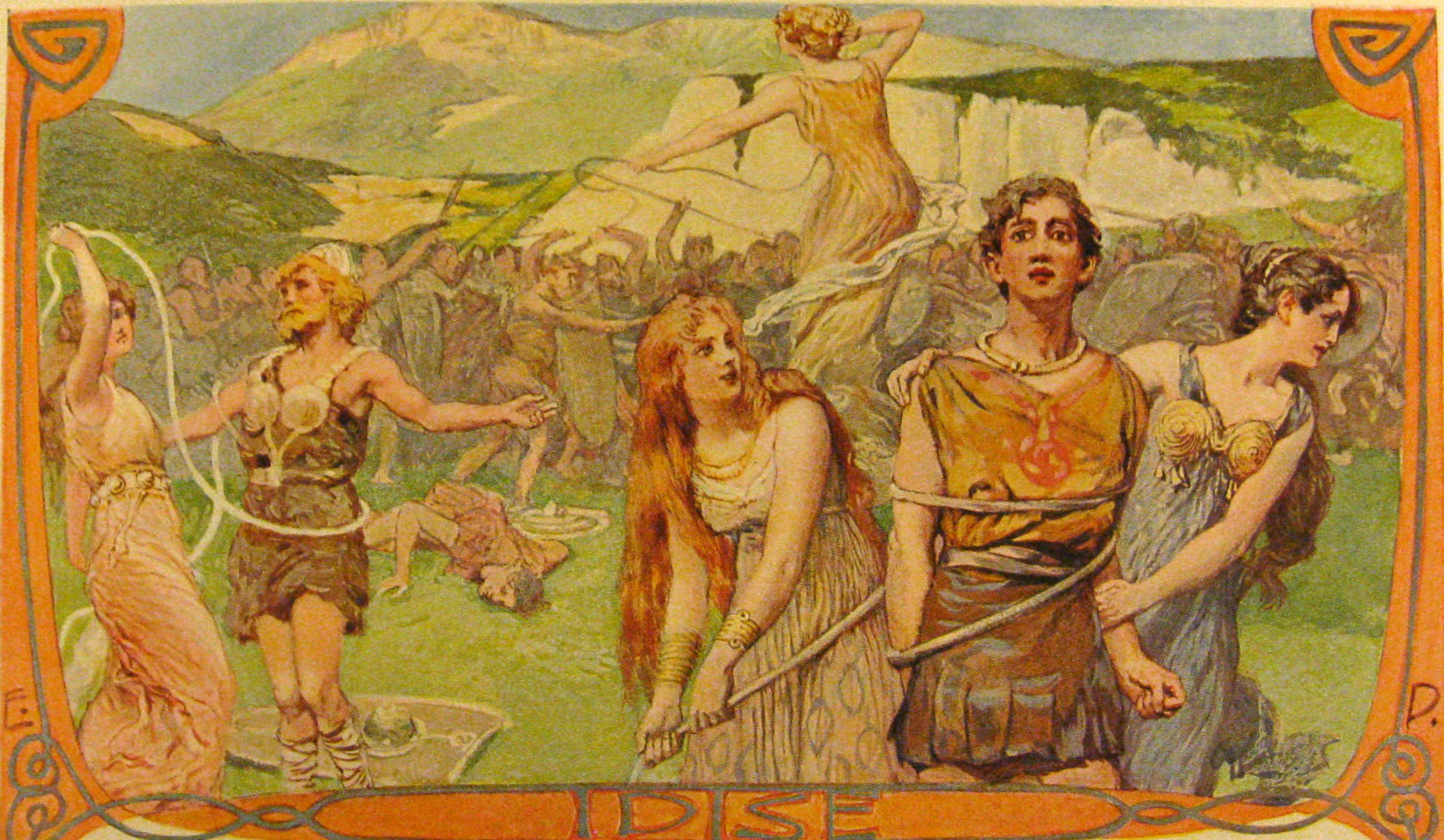 In Germanic mythology, an idis (Old Saxon, plural idisi) is a divine female being. Idis is cognate to Old High German itis and Old English ides, meaning 'well-respected and dignified woman.' Connections have been assumed or theorized between the idisi and the North Germanic dísir; female beings associated with fate, as well as the amended place name Idistaviso.

Just to make it clear, this woman in the Voynich is holding this chain. She is not being cuffed by God or leading around a monkey on a leash, as in Fludd's chain of being: 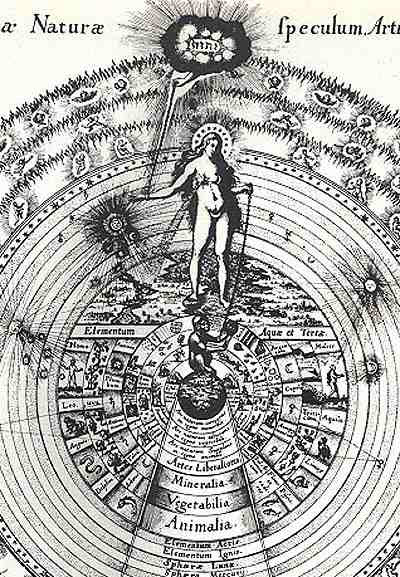 By contrast, the Voynich woman holding the chains is a norn or dis, equivalent to a Fate/ancestor, making decisions about life and death, timing and the seasons

In Old Norse, the fourth day of the week is known as Oðinsdagr, Odin’s day. In Swedish and Danish, it is Onsdag; in North Frisian, Winsdei; in Middle Dutch, Woensdach; in Anglo-Saxon, Wodenes dæg, but in Westphalia, they call it Godenstag, Gonstag, Gaunstag, Gunstag, and in documents from the Lower Rhine, Gudestag and Gudenstag. Similarly, in the History of the Lombards, the first literary appearance of Odin and his wife, Odin is known as Godan. Grimm observes that a dialect which says fauer instead of foer, foder will equally have Gaue for Gode, Guode. Thus, in Frau Gauen or Gauden, German farmers have preserved the memory of a Mrs. Odin at work beside her husband in the fields long after the coming of Christianity.

The Wheel of the Year

Here is a similar diagram of the seasons from France, S. (Toulouse?) called Royal 19 C I   f. 54v created about a century earlier than the Voynich. 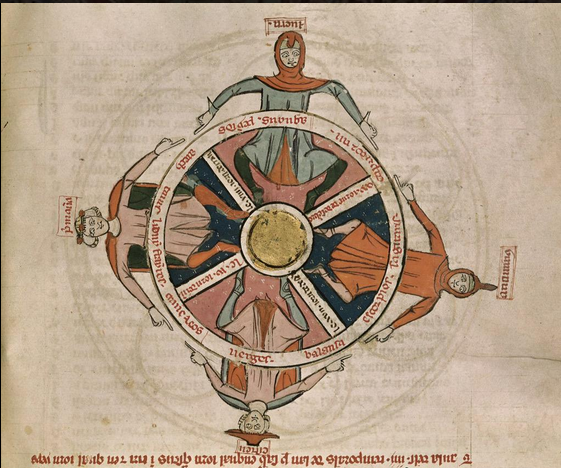 Below is the Voynich manuscript's wheel of the year highlighting the holidays where seasons began. 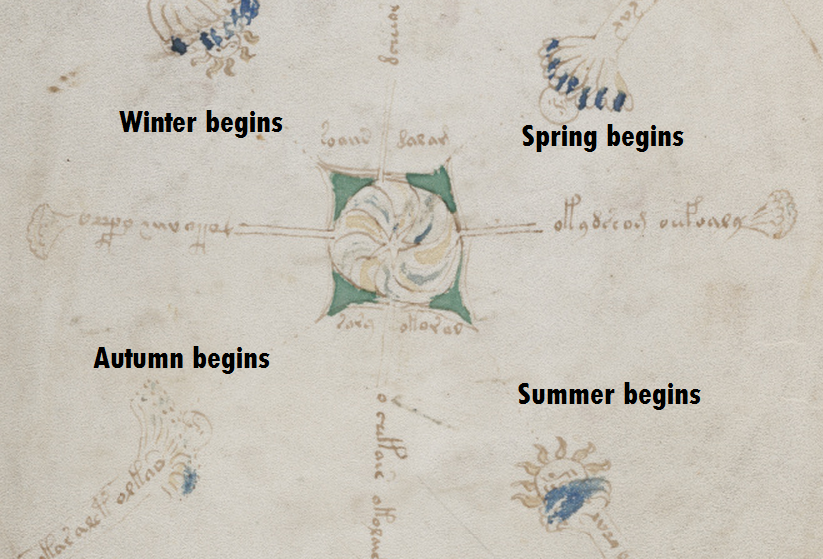 Here is a dissection of the various elements labeled, along with a modern chart showing this dynamic from the standpoint of modern astronomy. 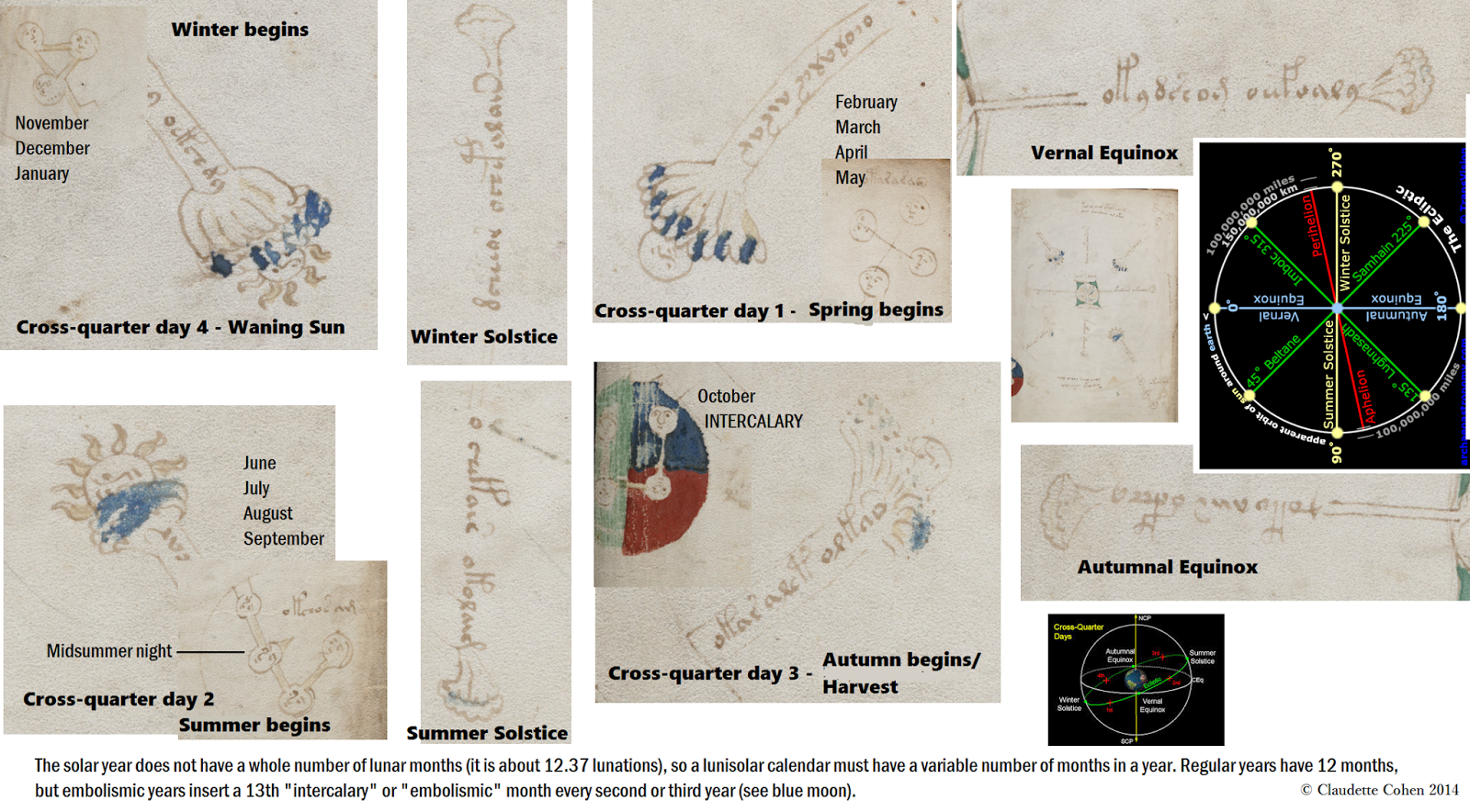 Notice that the moon configuration for each of the four seasons is left uncolored EXCEPT Cross-quarter day 3, when autumn/harvest begins. the blue and red circle surrounding the moons indicate that this period is variable and especial. This is the intercalary period. when that particular holiday variously called
Winter Nights, Mothers Night, Modraniht, Twelve Days, dísablót, dísaþing, Perchiennacht, Yul, etc. originally took place. During this time, the boundary between the living world and the dead was thinnest, and the spirits of ancestors came to visit. Halloween is a remnant. Later, much of the original fanfare of this holiday was moved to between December and January and called Christmas.

Below is a close-up of the wheel's rim, which has faded with time. 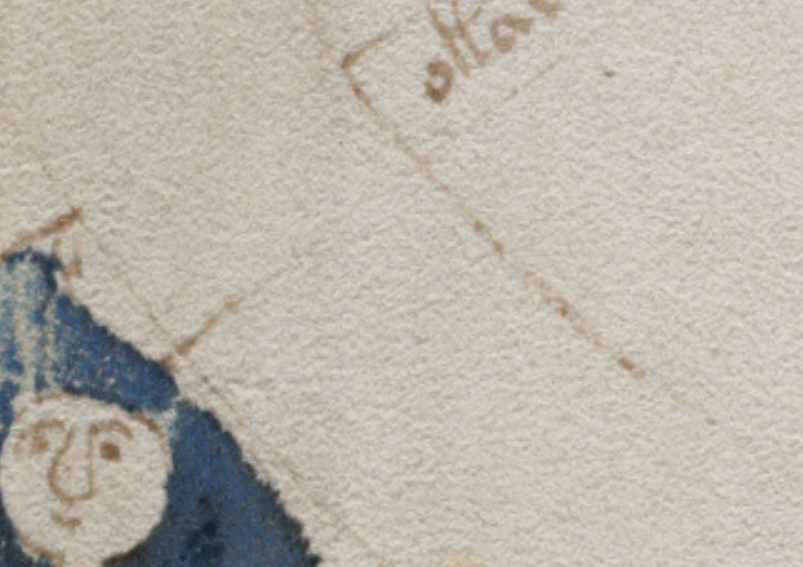 The Coligny calendar considers the phases of the moon to be important, and each month always begins with the same moon phase. The calendar uses a mathematical arrangement to keep a normal 12-month calendar in sync with the moon and keeps the whole system in sync by adding an intercalary month every 21⁄2 years. The Coligny calendar registers a five-year cycle of 62 lunar months, divided into a "bright" and a "dark" fortnight (or half a moon cycle) each. The months were possibly taken to begin on the new moon, and a 13th intercalary month was added every two and a half years to align the lunations with the solar year.

Posted by Claudette Cohen at 2:17 AM